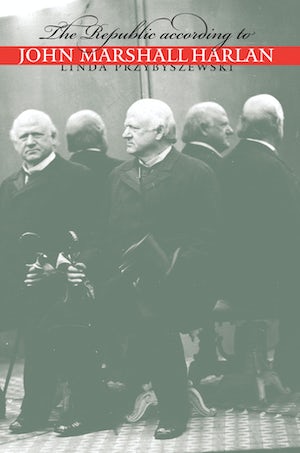 Supreme Court Justice John Marshall Harlan (1833-1911) is best known for condemning racial segregation in his dissent from Plessy v. Ferguson in 1896, when he declared, "Our Constitution is color-blind." But in other judicial decisions--as well as in some areas of his life--Harlan's actions directly contradicted the essence of his famous statement. Similarly, Harlan was called the people's judge for favoring income tax and antitrust laws, yet he also upheld doctrines that benefited large corporations.

Examining these and other puzzles in Harlan's judicial career, Linda Przybyszewski draws on a rich array of previously neglected sources--including the verbatim transcripts of his 1897-98 lectures on constitutional law, his wife's 1915 memoirs, and a compilation of opinions, drawn up by Harlan himself, that he wanted republished. Her thoughtful examination demonstrates how Harlan inherited the traditions of paternalism, nationalism, and religious faith; how he reshaped these traditions in light of his experiences as a lawyer, political candidate, and judge; and how he justified the vision of the law he wrote.

An innovative combination of personal and judicial biography, this book makes an insightful contribution to American constitutional and intellectual history.

"Clearly a book . . . that all judicial scholars will have to take note of in the future."--Law and History Review

"An excellent description and analysis of the possible sources and meaning of John Marshall Harlan's judicial decisions."--Journal of American History

"This fine book provides a balanced and judicious study of Harlan's jurisprudence. Drawing on overlooked sources, Przybyszewski offers fresh insights into the norms that influences Harlan's work as a judge. . . . This work should be of interest to a wide range of scholars."--American Historical Review

"The serious student of American history, or its government, can hardly fail to find this densely packed volume rewarding."--Rapport

"Przybyszewski skillfully exploits several hitherto overlooked primary documents and argues that in the context of Harlan’s life experiences and ideology, his juridical writings are less consistent and more of a ‘mixed record’ than commonly thought. . . . An excellent contribution to a discourse she invites others to join."--Choice

"A fine intellectual biography of an important figure in American Law."--Law and Politics Book Review