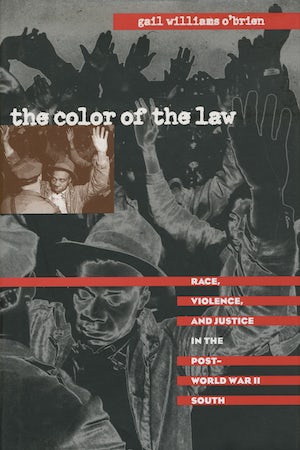 On February 25, 1946, African Americans in Columbia, Tennessee, averted the lynching of James Stephenson, a nineteen-year-old, black Navy veteran accused of attacking a white radio repairman at a local department store. That night, after Stephenson was safely out of town, four of Columbia's police officers were shot and wounded when they tried to enter the town's black business district. The next morning, the Tennessee Highway Patrol invaded the district, wrecking establishments and beating men as they arrested them. By day's end, more than one hundred African Americans had been jailed. Two days later, highway patrolmen killed two of the arrestees while they were awaiting release from jail.

Drawing on oral interviews and a rich array of written sources, Gail Williams O'Brien tells the dramatic story of the Columbia "race riot," the national attention it drew, and its surprising legal aftermath. In the process, she illuminates the effects of World War II on race relations and the criminal justice system in the United States. O'Brien argues that the Columbia events are emblematic of a nationwide shift during the 1940s from mob violence against African Americans to increased confrontations between blacks and the police and courts. As such, they reveal the history behind such contemporary conflicts as the Rodney King and O. J. Simpson cases.

Gail Williams O'Brien is professor of history and associate dean for graduate studies, planning, and faculty affairs in the College of Humanities and Social Sciences at North Carolina State University in Raleigh.

"A deeply textured book about the so-called race riot provoked by a white mob's attempt to lynch a young black World War II veteran. . . . O'Brien provides a wealth of detail on the incident and the response to it, which itself is a powerful and important story. But she goes far beyond that to provide fascinating insights into the social, economic, and community developments that were beginning to undermine the Jim Crow legal system. O'Brien's determined research. . . . has resulted in a complex, multilayered story."--Journal of Southern History

"An important addition to the history of the post-war South and the system of justice which became an integral part of the ensuing modern Civil Rights Movement."--American Studies

"O'Brien has combed the resulting court records, ransacked archives across the country, and interviewed dozens of people to reconstruct what happened in that particular time and place. . . . [An] exemplary book."--Journal of American History

"Well-written, well-researched, and extremely thought-provoking. . . . An important addition to the literature on race relations in the post-World War II South."--American Historical Review

"An important work that adds depth and context to our knowledge of the American South and America itself. The Color of the Law is a model of careful and courageous scholarship and should be standard reading for students of law and justice in the United States."--Law and Politics Book Review