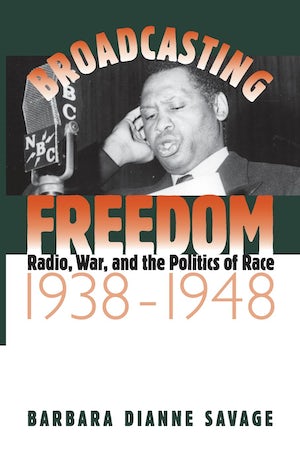 The World War II era represented the golden age of radio as a broadcast medium in the United States; it also witnessed a rise in African American activism against racial segregation and discrimination, especially as they were practiced by the federal government itself. In Broadcasting Freedom, Barbara Savage links these cultural and political forces by showing how African American activists, public officials, intellectuals, and artists sought to access and use radio to influence a national debate about racial inequality.

Drawing on a rich and previously unexamined body of national public affairs programming about African Americans and race relations, Savage uses these radio shows to demonstrate the emergence of a new national discourse about race and ethnicity, racial hatred and injustice, and the contributions of racial and immigrant populations to the development of the United States. These programs, she says, challenged the nation to reconcile its professed egalitarian ideals with its unjust treatment of black Americans and other minorities.

This examination of radio's treatment of race as a national political issue also provides important evidence that the campaigns for racial justice in the 1940s served as an essential, and still overlooked, precursor to the civil rights campaigns of the 1950s and 1960s, Savage argues. The next battleground would be in the South--and on television.

"A brilliant and provocative book. It chronicles masterfully black perceptions of the radio airwaves as a new arena in which to project the message of racial equality."--American Historical Review

"Groundbreaking. . . . A study of great value to scholars of black history, communications, propaganda, and mid-century America. No one working in these subjects should overlook this book."--The Historian

"Broadcasting Freedom contributes to two important areas of inquiry that have expanded greatly in recent years: the history of radio and the history of the African American struggle for civil rights in the 1930s and 1940s. This extraordinary book will help shape the way we think about both."--Journal of American History

"A polished, scholarly account that traces the evolution of national radio in confronting stereotypes of Blacks and pushing for political and economic equality. Serious readers of Black history will appreciate this carefully researched and well-written book."--Emerge