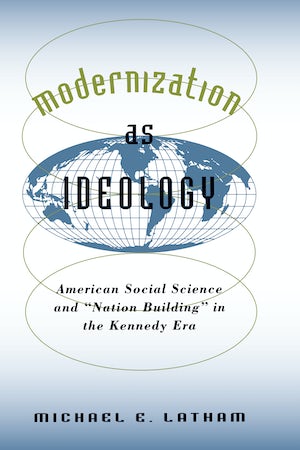 To purchase online via an independent bookstore, visit Bookshop.org
Providing new insight on the intellectual and cultural dimensions of the Cold War, Michael Latham reveals how social science theory helped shape American foreign policy during the Kennedy administration. He shows how, in the midst of America's protracted struggle to contain communism in the developing world, the concept of global modernization moved beyond its beginnings in academia to become a motivating ideology behind policy decisions.

After tracing the rise of modernization theory in American social science, Latham analyzes the way its core assumptions influenced the Kennedy administration's Alliance for Progress with Latin America, the creation of the Peace Corps, and the strategic hamlet program in Vietnam. But as he demonstrates, modernizers went beyond insisting on the relevance of America's experience to the dilemmas faced by impoverished countries. Seeking to accelerate the movement of foreign societies toward a liberal, democratic, and capitalist modernity, Kennedy and his advisers also reiterated a much deeper sense of their own nation's vital strengths and essential benevolence. At the height of the Cold War, Latham argues, modernization recast older ideologies of Manifest Destiny and imperialism.

"A particularly interesting study. . . . A stimulating and well-written book that contributes significantly to our understanding of the ideologically underpinned activist crusades the United States embarked upon in the Kennedy years."--Journal of American History

"In this thoroughly researched, eloquently written book, Michael Latham examines how 'modernization theory' influenced the underlying ideological assumptions of US foreign policy-making during the Kennedy administration. . . . Latham's is an important book that should find a wide audience among those interested in the history of the Cold War, the Kennedy administration and its legacy, US policies towards the Third World, especially Vietnam and Latin America, and in particular the cultural and ideological underpinnings of US foreign policy. The book forms part of the valuable New Cold War History series being produced by the UNC Press."--International Affairs

"Carefully researched. . . . This book should be widely read by students and scholars of history, political science, sociology, and policy analysis. Its lessons are still very relevant today."--Choice

"Elegant, precise, and copiously informative, Michael Latham's book on the ideology of developmental modernization in the early 1960s is a marvellous example of what diplomatic history can do when it becomes critical and pushes limits while maintaining a thorough grounding in historical evidence."--Anders Stephanson, Columbia University