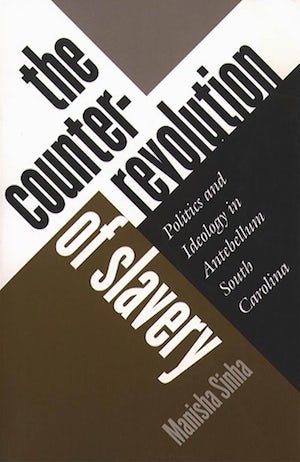 To purchase online via an independent bookstore, visit Bookshop.org
In this comprehensive analysis of politics and ideology in antebellum South Carolina, Manisha Sinha offers a provocative new look at the roots of southern separatism and the causes of the Civil War. Challenging works that portray secession as a fight for white liberty, she argues instead that it was a conservative, antidemocratic movement to protect and perpetuate racial slavery.

Sinha discusses some of the major sectional crises of the antebellum era--including nullification, the conflict over the expansion of slavery into western territories, and secession--and offers an important reevaluation of the movement to reopen the African slave trade in the 1850s. In the process she reveals the central role played by South Carolina planter politicians in developing proslavery ideology and the use of states' rights and constitutional theory for the defense of slavery.

Sinha's work underscores the necessity of integrating the history of slavery with the traditional narrative of southern politics. Only by taking into account the political importance of slavery, she insists, can we arrive at a complete understanding of southern politics and the enormity of the issues confronting both northerners and southerners on the eve of the Civil War.

Manisha Sinha is associate professor of Afro-American studies and history at the University of Massachusetts, Amherst.
For more information about Manisha Sinha, visit the Author Page.

"In this engaging book, Manisha Sinha places slavery at the center of southern political distinctiveness in the antebellum era and South Carolina at the forefront of southern nationalism. . . . Finely written and compelling."--American Historical Review

"Likely to become the definitive account of antebellum political culture and ideology in South Carolina."--Journal of American Studies

"A complete story of the rise of secession thinking in South Carolina. . . . Sinha's book will create much excellent debate and her study should be required reading for historians of the United States."--Journal of the Early Republic

"This is the best account to date of the militant defense of slavery and state sovereignty that put South Carolina in the vanguard of the southern secession movement. It argues cogently that the South Carolina elite was in full rebellion against democracy and the equal-rights heritage of the American Revolution and not merely defending its own variant of republicanism. This deeply researched and well-crafted study makes a significant contribution to our understanding of the causes of the Civil War."--George M. Fredrickson, Stanford University

"Lucidly and often brilliantly written and based on extensive research in antebellum South Carolina sources . . . Sinha's book narrates and interprets South Carolina's proslavery politics from nullification to secession. . . . This book belongs in the front ranks of scholarship on the politics of slavery."--Civil War History