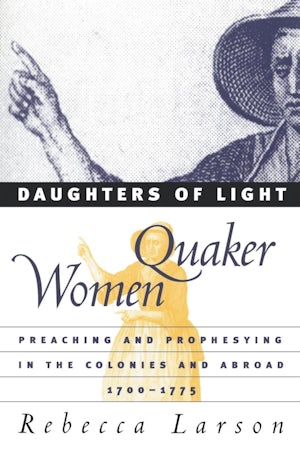 To purchase online via an independent bookstore, visit Bookshop.org
More than a thousand Quaker female ministers were active in the Anglo-American world before the Revolutionary War, when the Society of Friends constituted the colonies' third-largest religious group. Some of these women circulated throughout British North America; others crossed the Atlantic to deliver their inspired messages. In this public role, they preached in courthouses, meeting houses, and private homes, to audiences of men and women, to Quakers and to those of other faiths, to Native Americans and to slaves.

Utilizing the Quakers' rich archival sources, as well as colonial newspapers and diaries, Rebecca Larson reconstructs the activities of these women. She offers striking insights into the ways their public, authoritative role affected the formation of their identities, their families, and their society. Extensively researched and compellingly written, Daughters of Light enriches our understanding of religion and women's lives in colonial America.

Rebecca Larson is a historian who lives in Santa Barbara, California.
For more information about Rebecca Larson, visit the Author Page.

"Rebecca Larson offers a deeper and more daring probe into colonial religious life. To recover the long-obscured lives of Quaker women preachers, Larson ventures far beyond print sources into a diverse array of previously untapped manuscript letters, diaries, journals, and church records from many archives in both Great Britain and the United States. From new sources, she documents ordinary people with extraordinary experiences to reveal eighteenth-century spirituality from a provocative new angle."--New Republic

"Daughters of Light is a sustained act of historical recovery. . . . [Larson] has given us the stories of thousands of women whose words and courageous deportment forced large numbers of British North Americans to admit female competence."--Women’s Review of Books

"Larson has written the first comprehensive account of the role of 18th-century Quaker women ministers. . . . Daughters of Light will also be useful for scholars of women's history because it shows how itinerant women ministers created a visible public role, exercising authority within and outside the Quaker meeting."--Choice

"Daughters of Light should be required reading for everyone engaged by present-day debates about whether the clergy should be open to women."--Philadelphia Inquirer

"Wonderfully researched and written. . . . One of the best books ever on women and Quakerism."--Kirkus Reviews

"With grace and insight . . . Larson brings to light a story too long left in the shadows of Colonial American and religious history. . . . [She] has resurrected these remarkable women and makes us rethink basic assumptions about women and religious tolerance in Colonial America. Larson is our own ‘daughter of light’ in giving us so rich a history."--Library Journal