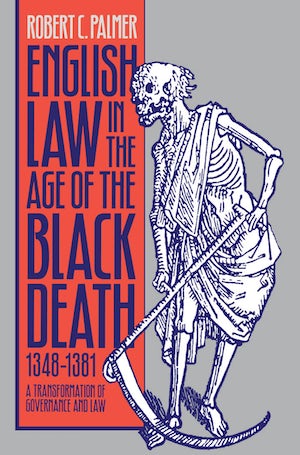 Robert Palmer's pathbreaking study shows how the Black Death triggered massive changes in both governance and law in fourteenth-century England, establishing the mechanisms by which the law adapted to social needs for centuries thereafter. The Black Death killed one-third of the English population between 1348 and 1351. To preserve traditional society, the king's government aggressively implemented new punitive legal remedies as a mechanism for social control. This attempt to shore up traditional society in fact transformed it. English governance now legitimately extended to routine regulation of all workers, from shepherds to innkeepers, smiths, and doctors. The new cohesiveness of the ecclesiastical and lay upper orders, the increase in subject matter jurisdictions, the growth of the chancellor's court, and the acceptance of coercive contractual remedies made the Black Death in England a transformative experience for law and for governance. Palmer's book, based on all of the available legal records, establishes a genuinely new interpretation and chronology of these important legal changes.

Ralph E. Luker, adjunct professor of history at Morehouse College, is author of the Historical Dictionary of the Civil Rights Movement and editor of the memoirs of Mary White Ovington.
For more information about Robert C. Palmer, visit the Author Page.

"[Palmer's] account of the development of uses and of the written bond will prove indispensable to any student of medieval law."--Cambridge Law Journal

"What Palmer does conclusively demonstrate is important; that this was a period of significant change, when the law tightened up in a wide range of types of cases."--Times Literary Supplement

"This is a big, bold, and very important book about the effects of the Black Death. It challenges the doctrinal view of legal history in which the common law was made by lawyers and judges in the interests of the clients, in a context often devoid of political, social, and economic reality."--American Journal of Legal History

"Although the story of the Black Death has been told, and often told well, Robert Palmer is the first to bring this story into correspondence with the history of English law. His is a notable achievement, not only because he explains why the Black Death represented a significant turning point and catalyst for legal change, but because his explanation is so learned and skillfully detailed as to leave no doubt that the practice of law was crucially important for the quality of life in a society in transition. . . . By focusing on the process of change, Palmer has formulated an argument that in its historical and philosophical depth not only engages but persuades. It is the sureness of this argument that makes English Law in the Age of the Black Death such a thoughtful and impressive book."--Law and History Review

"An extraordinarily cohesive and logical account that enables readers to come to grips with fundamental changes in English law and governance with little difficulty."--Michigan Law Review