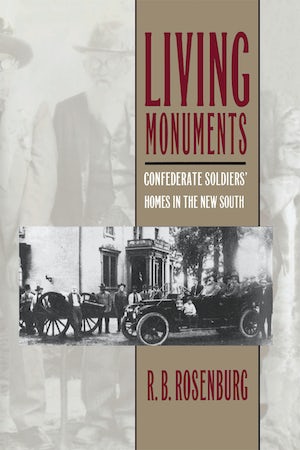 To purchase online via an independent bookstore, visit Bookshop.org
While battlefield parks and memorials erected in town squares and cemeteries have served to commemorate southern valor in the Civil War, Confederate soldiers' homes were actually 'living monuments' to the Lost Cause, housing the very men who made that cause their own. R. B. Rosenburg provides the first account of the establishment and operation of these homes for disabled and indigent southern veterans, which had their heyday between the 1880s and the 1920s. These institutions were commonly perceived as dignified retreats, where veterans who had seen better days could find peace, quiet, comfort, and happiness. But as Rosenburg shows, the harsher reality often included strict disciplinary tactics to maintain order and the treatment of indigent residents as wards and inmates rather than honored veterans. Many men chafed under the rigidly paternalistic administrative control and resented being told by their 'betters' how to behave. Rosenburg makes clear the idealism and sense of social responsibility that motivated the homes' founders and administrators, while also showing that from the outset the homes were enmeshed in political self-interest and the exploitation of the Confederate heritage.

R. B. Rosenburg, research assistant professor of history at the University of Tennessee, is editor of 'For the Sake of My Country': The Diary of Colonel William W. Ward, 9th Tennessee Cavalry, Morgan's Brigade, C.S.A.


For more information about R. B. Rosenburg, visit the Author Page.

"An original and useful analysis of an often overlooked aspect of the sectional conflict: the postwar lives of the men who fought for the Confederacy."--Register of the Kentucky Historical Society

"Rosenburg shows us how little concrete reward the soldiers of the Confederacy received once the guns stopped and the rush into the future began."--American Historical Review

"Employing an imposing array of primary materials, thoroughly documented, Rosenburg's monograph is highly original, a major addition to New South history. In clear, graceful, lucid prose, it illuminates the soldiers' home movement and says much about the Lost Cause, the postwar fortunes of ordinary Confederate veterans, and concepts of social responsibility."--Southern Humanities Review

"Impressively researched and convincingly argued, Living Monuments makes a major contribution to our understanding of the Lost Cause and the evolution of social welfare policy in the South. Among its other virtues, it boasts a careful and judicious use of statistical evidence on Confederate veterans' homes and an intriguing analysis of the not-altogether-successful attempt to establish paternalistic discipline in them."--Gaines M. Foster, Louisiana State University

"Rosenburg's study is the best yet of the realities of the myth of the Lost Cause . . . [and] suggests the problems of embodying the myth in an institution. It offers an exemplary group portrait of Confederate veterans of plain folk background, suggesting in rich detail the social class dimensions in the commemoration of the Confederate heritage. This book is altogether original."--Charles Reagan Wilson, University of Mississippi