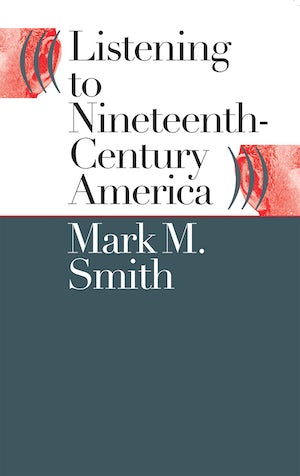 Arguing for the importance of the aural dimension of history, Mark M. Smith contends that to understand what it meant to be northern or southern, slave or free--to understand sectionalism and the attitudes toward modernity that led to the Civil War--we must consider how antebellum Americans comprehended the sounds and silences they heard.

Smith explores how northerners and southerners perceived the sounds associated with antebellum developments including the market revolution, industrialization, westward expansion, and abolitionism. In northern modernization, southern slaveholders heard the noise of the mob, the din of industrialism, and threats to what they considered their quiet, orderly way of life; in southern slavery, northern abolitionists and capitalists heard the screams of enslaved labor, the silence of oppression, and signals of premodernity that threatened their vision of the American future. Sectional consciousness was profoundly influenced by the sounds people attributed to their regions. And as sectionalism hardened into fierce antagonism, it propelled the nation toward its most earsplitting conflict, the Civil War.

Mark M. Smith, author of Mastered by the Clock: Time, Slavery, and Freedom in the American South, is Carolina Distinguished Professor of History at the University of South Carolina in Columbia.
For more information about Mark M. Smith, visit the Author Page.

"Well written and innovative in its approach, this book complicates and enriches the discussion of why sectionalism developed in the 1830s through the 1850s and how it contributed to the Civil War."--North Carolina Historical Review

"[Listening to Nineteenth-Century America] is an eye-opening--or more to the point, ear-opening--exercise in the retrieval of potentially lost knowledge. Mark Smith's wonderful study of the 'aural landscape' of nineteenth-century America deplores the historiographical privileging of the visual sense."--Journal of American Studies

"The story of how the study of the sounds of everyday life help us to understand the coming of the Civil War, the war itself, and some of the politics of Reconstruction by giving a new dimension to a traditional historiography. . . . An exciting study that illuminates new areas of historical investigation."--Civil War Book Review

"Mark M. Smith ranks among the most original and innovative contemporary southern historians. He focuses analytically and creatively on questions virtually ignored by previous scholars, rereading long-familiar sources and forcing us to rethink basic components of the southern past. Smith consistently raises our consciousness to subtle and not-so-subtle forces that figured into the North-South dialogue."--Georgia Historical Quarterly

"What were the sounds of slavery, riots, steam-driven factories, and commerce before the Civil War? By asking such questions, Smith makes antebellum America more palpable to present-day readers."--Doubletake

"In this fascinating study Mark M. Smith analyzes how sound and the heard world contributed to the formation of sectional identities during the antebellum period; how the Civil War and Reconstruction changed the nation's listening habits; and how postbellum Americans reinterpreted the country's soundscapes. . . . Most historians of the nineteenth century privilege the world of sight and vision both in their choice of source material and in their analysis of those sources. Smith shows the limits of such an approach. He teaches us how meaningful sound was to the people of the nineteenth century and how useful an awareness of the heard world can be for historians seeking to understand the past in a more fully textured way."--Journal of Southern History