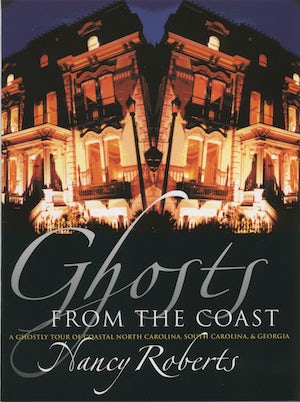 Acclaimed storyteller Nancy Roberts takes the reader on a haunted tour of coastal North Carolina, South Carolina, and Georgia in this engaging new collection of thirty-three ghost stories and legends.

In North Carolina, we hear of the restless spirit who troubles visitors to the Currituck Beach Lighthouse and the phantom ship that, though lost in a storm at sea, sailed into Beaufort Harbor for a final farewell. South Carolina provides the backdrop for tales such as that of the Union soldier killed at Charleston's Fort Sumter--more than a century later, a tourist is startled to discover the eerie, blue-coated figure of the soldier standing next to him. And in Georgia, we encounter ghostly pirates doomed to sail the creeks and inlets of St. Simons Island forever without rest, as well as rambunctious child spirits who roll pool balls down the hallways of a Savannah bed and breakfast, just as they did when their family lived in the house following the Civil War.

These new tales and classic legends, all collected firsthand by the author, reveal a thrilling undercurrent to some of the southern coast's most popular destinations.

Among the late Nancy Roberts's many books are Civil War Ghost Stories and Legends, Blackbeard and Other Pirates of the Atlantic Coast, and Haunted Houses: Chilling Tales from American Homes. A storyteller dedicated to inspiring students to read, she performed at seminars, on radio and television, and at hundreds of schools and libraries across the South.
For more information about Nancy Roberts, visit the Author Page.

"With her Ghosts from the Coast, Nancy Roberts proves once again that she is the preeminent author of true ghost stories in the American South. Although her compelling stories are filled with historical detail, she brings each tale right up to date through interviews with eyewitnesses to the haunting or, in many cases, her own personal accounts of visiting the ghostly lairs. From a spectral black funeral carriage on Hilton Head Island, to tales of sea monsters in the Altahama River of Georgia and haunted libraries with clerks more ethereal than real, to numerous inns, B&Bs, and pubs teeming with the wandering dead, Nancy Roberts includes enough authentic ghosts to give even the most skeptical reader a sudden chill on a steamy Carolina summer night."--Michael Norman, coauthor of Haunted Heartland and Haunted America