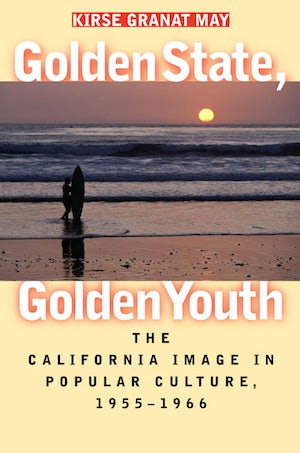 Seen as a land of sunshine and opportunity, the Golden State was a mecca for the post-World War II generation, and dreams of the California good life came to dominate the imagination of many Americans in the 1950s and 1960s. Nowhere was this more evident than in the explosion of California youth images in popular culture. Disneyland, television shows such as The Mickey Mouse Club, Gidget and other beach movies, the music of the Beach Boys--all these broadcast nationwide a lifestyle of carefree, wholesome fun supposedly enjoyed by white, middle-class, suburban young people in California.

Tracing the rise of the California teen as a national icon, Kirse May shows how idealized images of a suburban youth culture soothed the nation's postwar nerves while denying racial and urban realities. Unsettling challenges to this mass-mediated picture began to arise in the mid-1960s, however, with the Free Speech Movement's campus revolt in Berkeley and race riots in Watts. In his 1966 campaign for the governorship of California, Ronald Reagan transformed the backlash against the "dangerous" youths who fueled these actions into political triumph. As May notes, Reagan's victory presaged a rising conservatism across the nation.

"A first-rate examination of the popular cultural images of California young people from the mid-1950s to the mid-1960s. . . . An important and finely crafted study that is fun to read. Highly recommended to all libraries."--Choice

"An interesting assessment of the relationship between popular imagery and political realities."--American Historical Review

"Rich in evidence and thought-provoking in its interpretations. . . . A fascinating work on the ways in which even the most seemingly ephemeral or lightweight works of mass culture can shape public consciousness in intensely consequential ways. May's work can be read with profit by popular culture scholars, California historians, American studies scholars, and, more generally, by anyone concerned with the political powers and resonances of everyday cultural representations."--Journal of American History

"Wholly fascinating in its savvy take on the making and manipulation of pop culture, Kirse's study is a lively exercise in the deconstruction of beach movies, coonskin caps, surf music and even Annette Funicello's famous one-piece swimsuit."--Los Angeles Times

"May synthesizes a seemingly encyclopedic array of sources, thereby ensuring the book's value for scholars and general readers alike. . . . Golden State, Golden Youth is a welcome contribution to the ever-growing body of literature on California myth-making."--Southern California Quarterly

"How, when, and where did the youth culture that has so profoundly transformed this nation originate? Thanks to this elegantly researched and argued study by Kirse May, we now have the answer. In California in the mid-1950s and early 1960s a generation was defined by, and through, popular culture; and for forty years the young people of that era--growing up, growing middle-aged, growing into maturity--continued to feel the shaping influences of that moment."--Kevin Starr, State Librarian of California