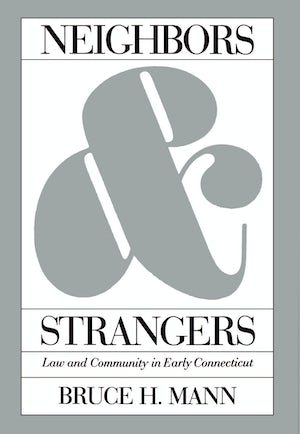 Combining legal and social history, Bruce Mann explores the relationship between law and society from the mid-seventeenth century to the eve of the Revolution. Analyzing a sample of more than five thousand civil cases from the records of local courts in Connecticut, he shows how once-neighborly modes of disputing yielded to a legal system that treated neighbors and strangers alike.

During the colonial period population growth, immigration, economic development, war, and religious revival transformed the nature and context of official and economic relations in Connecticut. Towns lost the insularity and homogeneity that made them the embodiment of community. Debt litigation was transformed from a communal model of disputing in which procedures were based on the individual disagreements to a system of mechanical rules that homogenized law. Pleading grew more technical, and the civil jury faded from predominance to comparative insignificance. Arbitration and church disciplinary proceedings, the usual alternatives to legal process, became more formal and legalistic and, ultimately, less communal.

Using a computer-assisted analysis of court records and insights drawn from anthropology and sociology, Mann concludes that changes in the law and its applications were tied to the growing commercialization of the economy. They also can be attributed to the fledgling legal profession's approach to law as an autonomous system rather than as a communal process. These changes marked the advent of a legal system that valued predictability and uniformity of legal relations more than responsiveness to individual communities. Mann shows that by the eve of the Revolution colonial law had become less identified with community and more closely associated with society.

Bruce H. Mann is professor of law and history at the University of Pennsylvania.