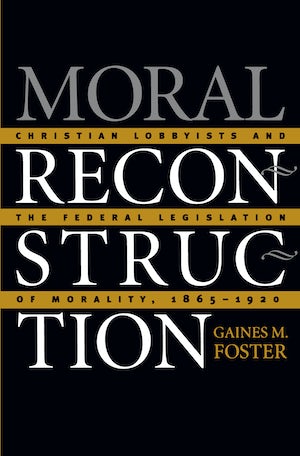 Between 1865 and 1920, Congress passed laws to regulate obscenity, sexuality, divorce, gambling, and prizefighting. It forced Mormons to abandon polygamy, attacked interstate prostitution, made narcotics contraband, and stopped the manufacture and sale of alcohol. Gaines Foster explores the force behind this unprecedented federal regulation of personal morality--a combined Christian lobby.

Foster analyzes the fears of appetite and avarice that led organizations such as the Women's Christian Temperance Union and the National Reform Association to call for moral legislation and examines the efforts and interconnections of the men and women who lobbied for it. His account underscores the crucial role white southerners played in the rise of moral reform after 1890. With emancipation, white southerners no longer needed to protect slavery from federal intervention, and they seized on moral legislation as a tool for controlling African Americans.

Enriching our understanding of the aftermath of the Civil War and the expansion of national power, Moral Reconstruction also offers valuable insight into the link between historical and contemporary efforts to legislate morality.

Gaines M. Foster, author of Ghosts of the Confederacy: Defeat, the Lost Cause, and the Emergence of the New South, is professor of history at Louisiana State University in Baton Rouge.

"Will stand for a long time as the definitive work on the Christian lobby between Emancipation and prohibition. . . . A solid study, meticulously researched . . . very well written. . . . Provides ample statistical support."--Journal of the American Academy of Religion

"In this timely study of the influence of religion in national politics, Foster persuasively argues that Christian lobbyists founded interest group politics."--Choice

"Bridges the gap between studies of late-nineteenth-century reform and inquiries into the development of the American state after the Civil War. . . . Excellent."--Journal of American History

"This is superb scholarship by a gifted historian. Foster's contribution is a vital resource for anyone attempting to understand the religious, social, and political life of late-nineteenth and early-twentieth-century America."--Georgia Historical Quarterly