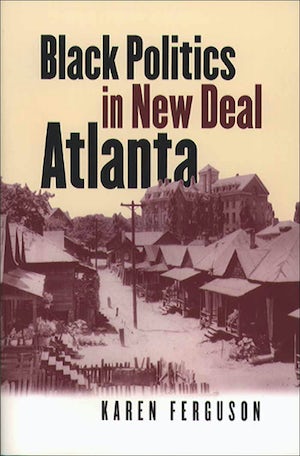 When Franklin Roosevelt was elected president in 1932, Atlanta had the South's largest population of college-educated African Americans. The dictates of Jim Crow meant that these men and women were almost entirely excluded from public life, but as Karen Ferguson demonstrates, Roosevelt's New Deal opened unprecedented opportunities for black Atlantans struggling to achieve full citizenship.

Black reformers, often working within federal agencies as social workers and administrators, saw the inclusion of African Americans in New Deal social welfare programs as a chance to prepare black Atlantans to take their rightful place in the political and social mainstream. They also worked to build a constituency they could mobilize for civil rights, in the process facilitating a shift from elite reform to the mass mobilization that marked the postwar black freedom struggle.

Although these reformers' efforts were an essential prelude to civil rights activism, Ferguson argues that they also had lasting negative repercussions, embedded as they were in the politics of respectability. By attempting to impose bourgeois behavioral standards on the black community, elite reformers stratified it into those they determined deserving to participate in federal social welfare programs and those they consigned to remain at the margins of civic life.

"A solid book that helps explain not only some foundations of the later Civil Rights Movement, but also the larger African American experience."--Choice

"Offers important insights into the ambiguous effects of government intervention in the lives of black Americans during the New Deal era."--American Historical Review

"Insightful. . . . Black Politics in New Deal Atlanta adds to our understanding of how the New Deal impacted in various ways at the local level."--Australasian Journal of American Studies

"An impressively detailed and thorough account of the response of Atlanta's black elite to New Deal politics. . . . [The] argument is novel and provocative."--Journal of American History

"Those who think the legacy of the Jim Crow era has ended would do well to read Karen Ferguson's book about the New Deal in Atlanta."--Journal of Southern History