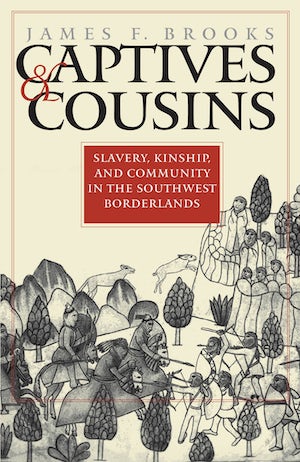 This sweeping, richly evocative study examines the origins and legacies of a flourishing captive exchange economy within and among native American and Euramerican communities throughout the Southwest Borderlands from the Spanish colonial era to the end of the nineteenth century.

Indigenous and colonial traditions of capture, servitude, and kinship met and meshed in the borderlands, forming a "slave system" in which victims symbolized social wealth, performed services for their masters, and produced material goods under the threat of violence. Slave and livestock raiding and trading among Apaches, Comanches, Kiowas, Navajos, Utes, and Spaniards provided labor resources, redistributed wealth, and fostered kin connections that integrated disparate and antagonistic groups even as these practices renewed cycles of violence and warfare.

Always attentive to the corrosive effects of the "slave trade" on Indian and colonial societies, the book also explores slavery's centrality in intercultural trade, alliances, and "communities of interest" among groups often antagonistic to Spanish, Mexican, and American modernizing strategies. The extension of the moral and military campaigns of the American Civil War to the Southwest in a regional "war against slavery" brought differing forms of social stability but cost local communities much of their economic vitality and cultural flexibility.

James F. Brooks is professor of history & anthropology at the University of California, Santa Barbara. He is editor of Confounding the Color Line: The Indian-Black Experience in North America.
For more information about James F. Brooks, visit the Author Page.

"Brooks tells this history with clarity and judiciousness."--Journal of American History

"I opened up this book and could not put it down. I was just knocked out by the fact that someone could be writing about slavery in such a new and totally fresh way that expands our horizons geographically and chronologically. It's so rare that you get bowled over by a work in your own field."--Scott McLemee, Chronicle of Higher Education

"This is an extraordinary book based on an imaginative reading of the documentary record and a judicious use of anthropological theory. By weaving ritual, folklore, and individual stories together with legal, ecclesiastical, and statistical evidence, Brooks has produced a book that satisfies the heart as well as the mind."--Theda Perdue, American Historical Review

"An interesting study of [a] little-known slave system. . . . Brooks illustrates the similarities of Spanish and Indian cultural traditions of capture, enslavement, adoption, and exploitation of outsiders, then examines the groups' similar notions of honor, shame, and gender. . . . Reveal[s] [a] heretofore incompletely understood social and economic Southwest slave tradition."--Choice

"Offers a fresh and insightful new perspective. . . . A synthesis of borderlands history that is relevant not only for students of northern Mexico and the American West, but for all who are interested in the interconnections between slavery, race and ethnicity."--American Studies