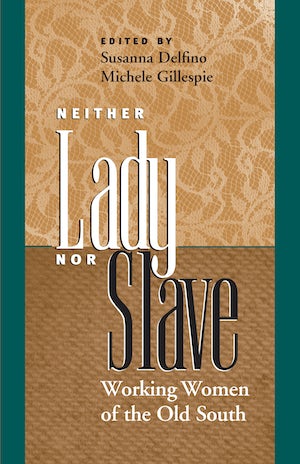 Although historians over the past two decades have written extensively on the plantation mistress and the slave woman, they have largely neglected the world of the working woman. Neither Lady nor Slave pushes southern history beyond the plantation to examine the lives and labors of ordinary southern women--white, free black, and Indian.

Contributors to this volume illuminate women's involvement in the southern market economy in all its diversity. Thirteen essays explore the working lives of a wide range of women--nuns and prostitutes, iron workers and basket weavers, teachers and domestic servants--in urban and rural settings across the antebellum South. By highlighting contrasts between paid and unpaid, officially acknowledged and "invisible" work within the context of cultural attitudes regarding women's proper place in society, the book sheds new light on the ambiguities that marked relations between race, class, and gender in the modernizing South.

Susanna Delfino is senior researcher and professor of American history at the University of Genoa in Italy.
For more information about Susanna Delfino, visit the Author Page.

"Neither Lady Nor Slave appreciably widens our acquaintance with the kinds of economic activities of prewar southern women, the wider consequences of some of those developments, and the varieties of women who worked. . . . This compilation makes a valuable contribution to our understanding of the developing prewar southern economy and women's complex role in it."--Southern Carolina Historical Magazine

"This concentration on the 'ordinary' women of the Old South helps to place in proper context women's roles in this society."--Civil War Book Review

"Adds intriguingly to the evidence about women, work, and the antebellum south."--Journal of Economic History

"If one wants to blast the myth of the 'Southern Lady' clean out of the water, run, do not walk, to buy this book. This outstanding collection of essays on women who worked in the Old South will provide plenty of ammunition. . . . This is a wonderful book-informative, well-edited, and springing from a serendipitous SHA conference conversation. May there be many more such conversations if this kind of scholarship is the result."--Georgia Historical Quarterly

"An invaluable collection of thirteen highly original and well-written essays. . . . Neither Lady nor Slave is an exciting and important study that enriches the historiography of women. Beautifully illustrated and impressively researched, it will appeal to the general public and academic specialists alike."--Florida Historical Quarterly

"These essays represent the cutting edge of the discipline of southern women's history. They are deeply and thoroughly researched, powerfully conceived and elegantly presented."--LeeAnn Whites, University of Missouri