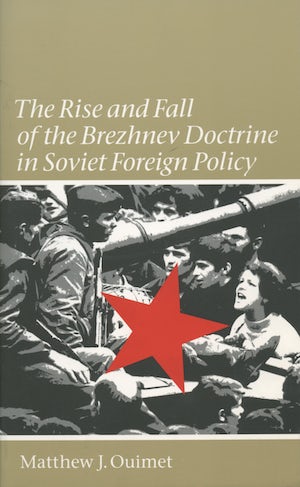 Since the sudden collapse of the communist system in Eastern Europe in 1989, scholars have tried to explain why the Soviet Union stood by and watched as its empire crumbled. The recent release of extensive archival documentation in Moscow and the appearance of an increasing number of Soviet political memoirs now offer a greater perspective on this historic process and permit a much deeper look into its causes.

The Rise and Fall of the Brezhnev Doctrine in Soviet Foreign Policy is a comprehensive study detailing the collapse of Soviet control in Eastern Europe between 1968 and 1989, focusing especially on the pivotal Solidarity uprisings in Poland. Based heavily on firsthand testimony and fresh archival findings, it constitutes a fundamental reassessment of Soviet foreign policy during this period. Perhaps most important, it offers a surprising account of how Soviet foreign policy initiatives in the late Brezhnev era defined the parameters of Mikhail Gorbachev's later position of laissez-faire toward Eastern Europe--a position that ultimately led to the downfall of socialist governments all over Europe.

"By mid-1981, although Poland had been engulfed by 'counter-revolutionary' strikes and demonstrations, the Soviet leadership decided against intervening militarily as the principle of 'socialist internationalism' prescribed. The elementary question, why did they refrain? still haunts many a political mind, and Matthew J. Ouimet . . . takes us a long way toward the answer."--Slavic Review

"A deftly written and fascinating study. . . . Ouimet's study represents an important contribution to the study of the rise and fall of the Soviet Union and last years of the Cold War, and should find a place on the bookshelves of both interested historians and political scientists alike. The book's tone and accessibility make it a good choice for advanced undergraduates and graduate students, and should find good use in the classroom as well."--Eurospan

"This volume is a valuable contribution to understanding how and why the Soviet empire unraveled. Matthew Ouimet finds the key well before Mikhail Gorbachev's rise to power, in Moscow's unsuccessful efforts to manage an eroding East European empire after the 1968 invasion of Czechoslovakia and up through the 1980-81 Solidarity revolution in Poland. By the end of the 1980s, Western statesmen were challenging Gorbachev to renounce the Brezhnev Doctrine; Ouimet draws on important new memoir and archival material to argue that it had been abandoned already, in fact, if not yet in policy."--Ambassador Robert L. Hutchings, former director for European affairs with National Security Council and author of American Diplomacy and the End of the Cold War