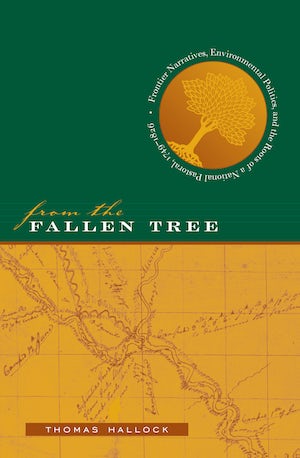 Anglo-American writers in the revolutionary era used pastoral images to place themselves as native to the continent, argues Thomas Hallock in From the Fallen Tree. Beginning in the mid-eighteenth century, as territorial expansion got under way in earnest, and ending with the era of Indian dispossession, the author demonstrates how authors explored the idea of wilderness and political identities in fully populated frontiers.

Hallock provides an alternative to the myth of a vacant wilderness found in later writings. Emphasizing shared cultures and conflict in the border regions, he reconstructs the milieu of Hector St. John de Crèvecoeur, Thomas Jefferson, Meriwether Lewis and William Clark, William Bartram, and James Fenimore Cooper, as well as lesser-known figures such as Lewis Evans, Jane Colden, Anne Grant, and Elias Boudinot. State papers, treaty documents, maps, and journals provide a rich backdrop against which Hallock reinterprets the origins of a pastoral tradition.

Combining the new western history, ecological criticism, and native American studies, Hallock uncovers the human stories embedded in descriptions of the land. His historicized readings offer an alternative to long-accepted myths about the vanishing backcountry, the march of civilization, and a pristine wilderness. The American pastoral, he argues, grew from the anxiety of independent citizens who became colonizers themselves.

Thomas Hallock is assistant professor of English at the University of South Florida St. Petersburg.
For more information about Thomas Hallock, visit the Author Page.

"Innovative and challenging. . . . Future literary scholars and historians will benefit from its insights, as they inevitably return to its central questions."--William and Mary Quarterly

"Hallock charges ecocritics with the task of paying close attention to colonial settlement and frontier narratives and the unstable ideas of place they contain. Historically rich, theoretically sound, and politically significant, From the Fallen Trees begins this work in earnest."--Interdisciplinary Studies in Literature & Environment

"I have rarely encountered someone who so seamlessly combines cultural critique and literary readings. I expect that along with literary critics, historians and geographers who turn to this book will also gain insight into the period. From the Fallen Tree is an excellent book, rich but unassuming, inventive as well as disciplined."--Wayne Franklin, Northeastern University