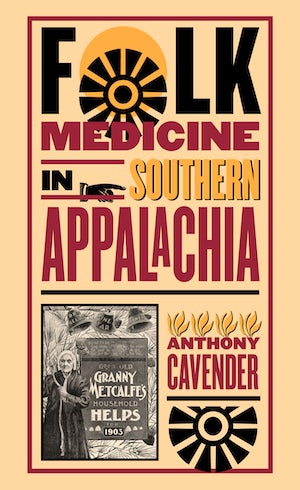 To purchase online via an independent bookstore, visit Bookshop.org
In the first comprehensive exploration of the history and practice of folk medicine in the Appalachian region, Anthony Cavender melds folklore, medical anthropology, and Appalachian history and draws extensively on oral histories and archival sources from the nineteenth century to the present. He provides a complete tour of ailments and folk treatments organized by body systems, as well as information on medicinal plants, patent medicines, and magico-religious beliefs and practices. He investigates folk healers and their methods, profiling three living practitioners: an herbalist, a faith healer, and a Native American healer. The book also includes an appendix of botanicals and a glossary of folk medical terms.

Demonstrating the ongoing interplay between mainstream scientific medicine and folk medicine, Cavender challenges the conventional view of southern Appalachia as an exceptional region isolated from outside contact. His thorough and accessible study reveals how Appalachian folk medicine encompasses such diverse and important influences as European and Native American culture and America's changing medical and health-care environment. In doing so, he offers a compelling representation of the cultural history of the region as seen through its health practices.

Anthony Cavender is professor of anthropology at East Tennessee State University in Johnson City. He is editor of A Folk Medical Lexicon of South Central Appalachia.
For more information about Anthony Cavender, visit the Author Page.

"Folk Medicine in Southern Appalachia is a text that will surely be read widely among the academic community interested in regional and medical anthropology study, but it is a book that could just [as] well be enjoyed by someone whose interest in Southern Appalachian folk medicine and mythology was sparked by reading Charles Frazier's Cold Mountain, or by a vague memory of a remedy that grandma once used. . . . If you are intrigued at the thought of mentally transporting yourself to a long-ago-cabin filled with dried herbs and magic, find a copy of Folk Medicine in Southern Appalachia and fill your head with tales of folk medicine and a regional history of healing."--The Mountain Times

"Well organized and easy to read. The historical context in each chapter brings the reader to a greater understanding of how history influences contemporary practices. Students of nursing, medicine, and anthropology will benefit from this book. They will be left with an understanding not only of the particular culture under study, but also of its influence on health care in other areas."--Nursing History Review

"A vivid picture of folk medical practices in southern Appalachia that dispels the notion of the region's residents as geographically and culturally isolated by placing their traditions firmly within the broader context of Euro-American folk medicine."--North Carolina Historical Review

"What is surprising is that this book has just now appeared to fill such an obvious gap. What is gratifying is that it is so comprehensive. What is so exciting is how well done it is."--Appalachian History

"[Folk Medicine in Southern Appalachia] explores a complex topic in great detail. . . . This volume should prove useful to a variety of readers. . . . An excellent resource for college students wishing to learn more about the Southern Appalachian region and the people living there."--Journal of Appalachian Studies