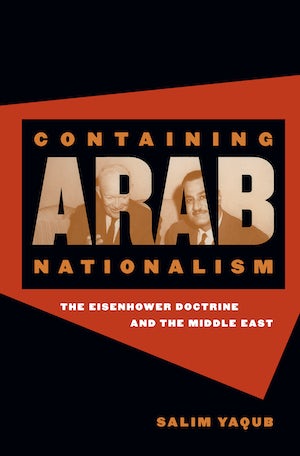 A 2004 Foreign Affairs Best Book on the Middle East

Under the Eisenhower Doctrine, the United States pledged to give increased economic and military aid to receptive Middle Eastern countries and to protect--with U.S. armed forces if necessary--the territorial integrity and political independence of these nations from the threat of "international Communism." Salim Yaqub demonstrates that although the United States officially aimed to protect the Middle East from Soviet encroachment, the Eisenhower Doctrine had the unspoken mission of containing the radical Arab nationalism of Egyptian president Gamal Abdel Nasser, whom Eisenhower regarded as an unwitting agent of Soviet expansionism. By offering aid and protection, the Eisenhower administration hoped to convince a majority of Arab governments to side openly with the West in the Cold War, thus isolating Nasser and decreasing the likelihood that the Middle East would fall under Soviet domination.

Employing a wide range of recently declassified Egyptian, British, and American archival sources, Yaqub offers a dynamic and comprehensive account of Eisenhower's efforts to counter Nasserism's appeal throughout the Arab Middle East. Challenging interpretations of U.S.-Arab relations that emphasize cultural antipathies and clashing values, Yaqub instead argues that the political dispute between the United States and the Nasserist movement occurred within a shared moral framework--a pattern that continues to characterize U.S.-Arab controversies today.

Salim Yaqub is assistant professor of American and international history at the University of Chicago.
For more information about Salim Yaqub, visit the Author Page.

"Presents a compelling case for a fresh interpretation of the U.S.-Arab dynamic. . . . A thoughtful, persuasively argued study that makes a valuable contribution. . . . Should be considered mandatory reading for anyone seeking to understand the interaction of U.S. Cold War imperatives with the realities of Middle Eastern politics."--Journal of Cold War Studies

"In laying bare such manifold American dilemmas in the region for the pivotal years of 1957 and 1958, Yaqub in a sharp analysis and clear language provides much needed historical contextualizations for problems still haunting the region and the world today."--Australasian Journal of American Studies

"This is a richly documented and detailed, yet eminently readable, study--the best available on the Eisenhower Doctrine and on those two tumultuous years, with still-relevant lessons for what works and what does not in Middle East diplomacy."--Foreign Affairs

"What emerges clearly from [Yaqub's account] is how little Washington understood the consequences of foisting its cold war obsessions upon a region with other things on its mind. . . . Brilliantly analyzed. . . . Sparkling."--The Nation

"[A] comprehensive study. . . . Drawing on extensive research . . . [Yaqub] carefully develops the formulation and implementation of . . . policies in what was becoming a central area for U.S. strategic policy development."--Choice

"This is a fine volume, well written, meticulous in its research, penetrating and sure-footed in its analysis, and fair to Washington as well as to the Arab actors. The book is a vivid reminder of Washington's difficulty in recognizing that nationalist forces in the third world could not be forced into a Cold War mold, a difficulty that would plague us with more tragic consequences in Vietnam a decade later."--Middle East Journal