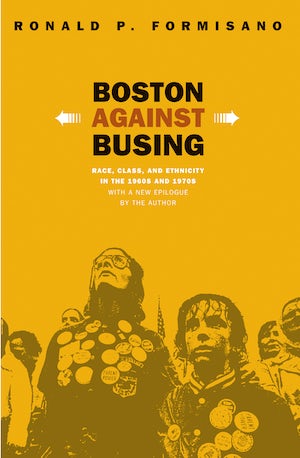 Perhaps the most spectacular reaction to court-ordered busing in the 1970s occurred in Boston, where there was intense and protracted protest. Ron Formisano explores the sources of white opposition to school desegregation. Racism was a key factor, Formisano argues, but racial prejudice alone cannot explain the movement. Class resentment, ethnic rivalries, and the defense of neighborhood turf all played powerful roles in the protest.

In a new epilogue, Formisano brings the story up to the present day, describing the end of desegregation orders in Boston and other cities. He also examines the nationwide trend toward the resegregation of schools, which he explains is the result of Supreme Court decisions, attacks on affirmative action, white flight, and other factors. He closes with a brief look at the few school districts that have attempted to base school assignment policies on class or economic status.

Ronald P. Formisano is William T. Bryan Chair of American History at the University of Kentucky and author of The Transformation of Political Culture: Massachusetts Parties, 1780s-1840s
For more information about Ronald P. Formisano, visit the Author Page.

"A nuanced treatment that is distinguished by its examination of context and telling detail."--American Historical Review

"Formisano has successfully taken on the unthinkable. With a scholar's rigor and a writer's passion, he has pierced the cocoon of myth surrounding matters of race and class. He has painted in, between the stark black and white, the crucial subtle shades of gray that color all social and political turmoil."--Alan Lupo, columnist for the Boston Globe

"Formisano addresses the roots of . . . violent expressions of discrimination with sensitivity and objectivity. While the author's remarks are confined to the Boston situation, where the struggle for integration provoked the largest, longest, and most organized protests in a northern city, by implication his observations have a much wider impact, demonstrating how a populist movement established a battlefield over a whole bag of social and economic questions."--Booklist

"This book should put to rest the myth that northern resistance to desegregation was less overt and virulent than that in the South. . . . [Formisano's] analysis of what went wrong in Boston is depressing but compelling and should be required reading for anyone concerned with racial equality."--Journal of American Ethnic History

"A sensitive, compelling account of the failure of forced busing in Boston."--Political Science Quarterly