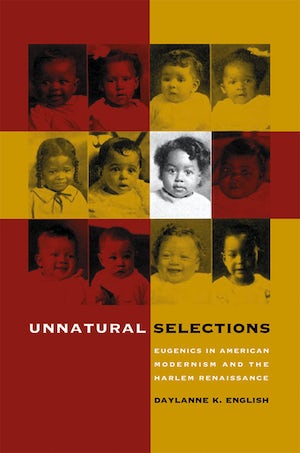 Challenging conventional constructions of the Harlem Renaissance and American modernism, Daylanne English links writers from both movements to debates about eugenics in the Progressive Era. She argues that, in the 1920s, the form and content of writings by figures as disparate as W. E. B. Du Bois, T. S. Eliot, Gertrude Stein, and Nella Larsen were shaped by anxieties regarding immigration, migration, and intraracial breeding.

English's interdisciplinary approach brings together the work of those canonical writers with relatively neglected literary, social scientific, and visual texts. She examines antilynching plays by Angelina Weld Grimké as well as the provocative writings of white female eugenics field workers. English also analyzes the Crisis magazine as a family album filtering uplift through eugenics by means of photographic documentation of an ever-improving black race.

English suggests that current scholarship often misreads early-twentieth-century visual, literary, and political culture by applying contemporary social and moral standards to the past. Du Bois, she argues, was actually more of a eugenicist than Eliot. Through such reconfiguration of the modern period, English creates an allegory for the American present: because eugenics was, in its time, widely accepted as a reasonable, progressive ideology, we need to consider the long-term implications of contemporary genetic engineering, fertility enhancement and control, and legislation promoting or discouraging family growth.

"[An] interesting and timely book . . . English challenges literary scholars' tendency to elevate literature beyond the ideologies and politics of its time. . . . Intellectually perceptive."--Journal of African American History

"Well-crafted. . . . English offers her work as a model for writing the history of broad trends in American literature and culture without losing sight of crucial issues of race and gender."--Journal of Southern History

"English's Unnatural Selections provides a more expansive and complex definition of eugenics, as well as a sense of its diverse contexts. . . . Well written, intellectually thorough, and well illustrated. . . . [An] exciting, exemplary new contribution[s] that will be useful to scholars in African American literature as well as American studies."--American Literature

"This brilliantly achieved study demonstrates the 'partnership' between eugenics and class-based, racial uplift thinking that has received insufficient notice in the past. English's arguments have grave implications for contemporary debates over immigration policy and state regulation of the poor."--Aldon Nielsen, Pennsylvania State University

"English's most significant contribution is the unusual juxtaposition and sustained connection of literary lives across the matrix of color, class, and gender. Her refusal to isolate 'black' from 'white' and 'male' from 'female' leads her to some rather remarkable readings, giving this book a formidable intellectual heft."--Matthew Pratt Guterl, Indiana University