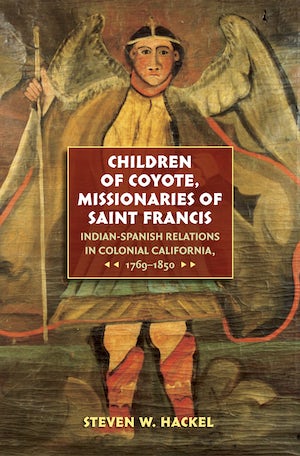 Recovering lost voices and exploring issues intimate and institutional, this sweeping examination of Spanish California illuminates Indian struggles against a confining colonial order and amidst harrowing depopulation. To capture the enormous challenges Indians confronted, Steven W. Hackel integrates textual and quantitative sources and weaves together analyses of disease and depopulation, marriage and sexuality, crime and punishment, and religious, economic, and political change.

As colonization reduced their numbers and remade California, Indians congregated in missions, where they forged communities under Franciscan oversight. Yet missions proved disastrously unhealthful and coercive, as Franciscans sought control over Indians' beliefs and instituted unfamiliar systems of labor and punishment. Even so, remnants of Indian groups still survived when Mexican officials ended Franciscan rule in the 1830s. Many regained land and found strength in ancestral cultures that predated the Spaniards' arrival.

At this study's heart are the dynamic interactions in and around Mission San Carlos Borromeo between Monterey region Indians (the Children of Coyote) and Spanish missionaries, soldiers, and settlers. Hackel places these local developments in the context of the California mission system and draws comparisons between California and other areas of the Spanish Borderlands and colonial America. Concentrating on the experiences of the Costanoan and Esselen peoples during the colonial period, Children of Coyote concludes with an epilogue that carries the story of their survival to the present day.

Steven W. Hackel is associate professor of history at the University of California Riverside.
For more information about Steven W. Hackel, visit the Author Page.

"A significant contribution to the varied and controversial literature on the evangelization of the native populations in California."--Missiology

"A bold and compelling account of the effect of Spanish rule on native peoples in Alta California. . . . Makes an important contribution to borderland and California histories as well as to the larger field of Native American History. . . . A new standard for California mission history."--Catholic Southwest

"An extraordinary book about the missions of California and the Indians who lived there. . . . A powerfully written narrative."--Journal of Anthropological Research

"The best recent study on the California missions . . . well worth reading."--Journal of American Ethnic History