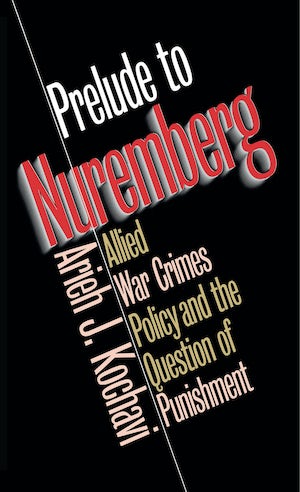 Between November 1945 and October 1946, the International

Military Tribunal in Nuremberg tried some of the most notorious

political and military figures of Nazi Germany. The issue of

punishing war criminals was widely discussed by the leaders of

the Allied nations, however, well before the end of the war. As

including the institution of the Nuremberg trials, represented

the culmination of a complicated process rooted in the domestic

and international politics of the war years.

reconstructs the deliberations that went on in Washington and

London at a time when the Germans were perpetrating their worst

crimes. He also examines the roles of the Polish and Czech

governments-in-exile, the Soviets, and the United Nations War

Crimes Commission in the formulation of a joint policy on war

crimes, as well as the neutral governments' stand on the question

of asylum for war criminals. This compelling account thereby

Arieh J. Kochavi is senior lecturer in history and director of The Strochlitz Institute of Holocaust Studies at the University of Haifa.

"Kochavi has written a serious and important book that should not be ignored."--American Historical Review

"This compelling account . . . sheds new light on one of the most important and least understood aspects of World War II."--Jewish Times Outlook

"Kochavi writes clearly and well, and his book is tightly organized and meticulously researched. As a valuable addition to existing treatments of the road to Nuremberg, Kochavi’s book reminds us of the steps and missteps--petty acts of politics and the great bursts of vision--that set the stage for Nuremberg."--Journal of Military History

"Organized chronologically and clearly written, the work offers a judicious and convincing interpretation of events."--Choice

"Kochavi shows how persistent efforts, especially by U.S. UNWCC representative Herbert Pell, resulted in the powerful new concepts included in the idea of crimes against humanity. . . . Kochavi, a historian at the University of Haifa, has taken a complicated, nuanced subject and, through extensive research and forceful retelling, has shed light not only on WWII but also on the response to similar atrocities in Rwanda and the former Yugoslavia, in which, once again, political interests have outweighed moral considerations."--Publishers Weekly

"An unbiased account of events that preceded the [Nuremberg] trials. In many ways, [t]his book also reflects emerging Cold War politics, as Britain, Russia, and the United States each maneuvered to prevent the other from becoming a dominant power. . . . An excellent account of Allied efforts to control commission policies and of the developing policy for trying war criminals."--Library Journal