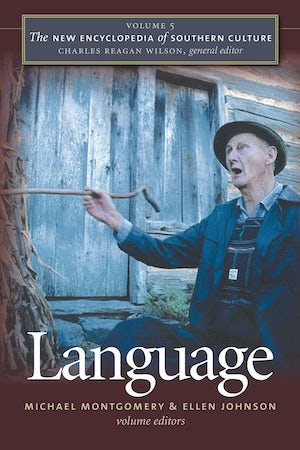 To purchase online via an independent bookstore, visit Bookshop.org
The fifth volume of The New Encyclopedia of Southern Culture explores language and dialect in the South, including English and its numerous regional variants, Native American languages, and other non-English languages spoken over time by the region's immigrant communities.

Among the more than sixty entries are eleven on indigenous languages and major essays on French, Spanish, and German. Each of these provides both historical and contemporary perspectives, identifying the language's location, number of speakers, vitality, and sample distinctive features. The book acknowledges the role of immigration in spreading features of Southern English to other regions and countries and in bringing linguistic influences from Europe and Africa to Southern English. The fascinating patchwork of English dialects is also fully presented, from African American English, Gullah, and Cajun English to the English spoken in Appalachia, the Ozarks, the Outer Banks, the Chesapeake Bay Islands, Charleston, and elsewhere. Topical entries discuss ongoing changes in the pronunciation, vocabulary, and grammar of English in the increasingly mobile South, as well as naming patterns, storytelling, preaching styles, and politeness, all of which deal with ways language is woven into southern culture.

Michael Montgomery is Distinguished Professor Emeritus of English at the University of South Carolina. His many books include Language Variety in the South: Perspectives in Black and White.
For more information about Michael B. Montgomery, visit the Author Page.

Ellen Johnson is associate professor of linguistics at Berry College in Rome, Georgia, and author of Lexical Change and Variation in the Southeastern United States.
For more information about Ellen Johnson, visit the Author Page.

"Thorough and far-reaching, yet ultimately accessible. . . . Contains an incredible amount of cultural, historical, and social information pulled together into a comprehensive overview of language use in the American South."--North Carolina Historical Review

"Effectively debunks simplistic and erroneously homogenizing notions. . . . The editors did not shy away from potentially problematic issues. . . . A handy and useful reference on this important issue of language in the South."--Louisiana History

"A good starting point to researching the languages and dialects found in the South."--American Reference Books Annual

"Tackles the complex and diverse field of Southern language and dialects. . . . A very readable and enjoyable survey."--Larry McGehee, Southern Seen

"A must-have for any educated Southerner. . . . You'll come away with a whole new perspective on your roots."--DEEP

"An excellent book that describes languages in the South, even those not commonly known to exist or to have existed; for example, descriptions of indigenous languages that do not belong to identified Native American Language families. . . . A complex picture of many different southerners speaking a variety of languages and dialects."--The Journal of Mississippi History