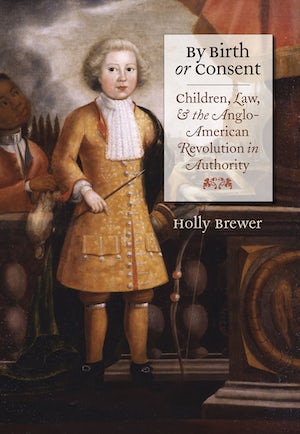 In mid-sixteenth-century England, people were born into authority and responsibility based on their social status. Thus elite children could designate property or serve in Parliament, while children of the poorer sort might be forced to sign labor contracts or be hanged for arson or picking pockets. By the late eighteenth century, however, English and American law began to emphasize contractual relations based on informed consent rather than on birth status. In By Birth or Consent, Holly Brewer explores how the changing legal status of children illuminates the struggle over consent and status in England and America. As it emerged through religious, political, and legal debates, the concept of meaningful consent challenged the older order of birthright and became central to the development of democratic political theory.

The struggle over meaningful consent had tremendous political and social consequences, affecting the whole order of society. It granted new powers to fathers and guardians at the same time that it challenged those of masters and kings. Brewer's analysis reshapes the debate about the origins of modern political ideology and makes connections between Reformation religious debates, Enlightenment philosophy, and democratic political theory.

Holly Brewer is associate professor of history and Burke Chair of American History at the University of Maryland.
For more information about Holly Brewer, visit the Author Page.

"[A] thought-provoking study of a neglected and yet immensely important topic."--Canadian Journal of History

“Brewer's book, By Birth or Consent . . . seeks to explore the political and legal foundation of the idea of informed consent that emerged during the seventeenth and eighteenth centuries. . . . The cultural implications spawned by . . . legal and philosophical developments are presented here with a certain flair and enthusiasm. Moreover, the use of court cases, county records, and other original sources helps to root [the] story about children and the law in fact.”--Times Literary Supplement

"The author of this volume has written two books, magnificently intertwined. . . . There is no doubt that Brewer's book will take a privileged place in all future accounts of childhood and political thought in the Atlantic world."--Historian

“By Birth or Consent is an intellectual feast; it is deeply learned and provocative.”--William and Mary Quarterly

“[A] highly original and powerfully argued book. . . . Brewer shows that questions about the nature of childhood and the powers and obligations of parents were central to the great debates among early modern religious, political, and legal thinkers over religious and political authority. Her approach yields important new insights into the origins of modern ideas about children and families, as well as the sources of modern Anglo-American political and legal thought and the limits inherent in its promise of political equality for all.”--The Journal of American History

“Through an exploration of the fundamental shift in legal assumptions about childhood, adulthood, and individual responsibility, Brewer offers new perspective on the roiling, centuries-long fight over the meaning of consent, as articulated by Locke and others, and its place in political power and the social order.”--Journal of Colonialism and Colonial History