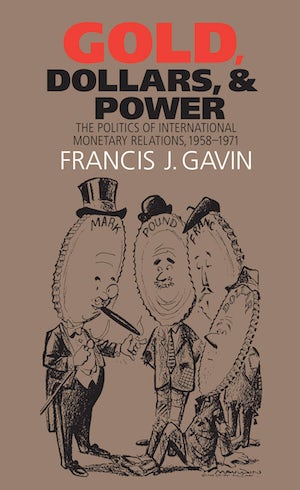 How are we to understand the politics of international monetary relations since the end of World War II? Exploiting recently declassified documents from both the United States and Europe and employing economic analysis and international relations theory, Francis Gavin offers a compelling reassessment of the Bretton Woods system of fixed exchange rates and dollar-gold convertibility.

Gavin demonstrates that, contrary to the conventional wisdom, Bretton Woods was a highly politicized system that was prone to crisis and required constant intervention and controls to continue functioning. More important, postwar monetary relations were not a salve to political tensions, as is often contended. In fact, the politicization of the global payments system allowed nations to use monetary coercion to achieve political and security ends, causing deep conflicts within the Western Alliance. For the first time, Gavin reveals how these rifts dramatically affected U.S. political and military strategy during a dangerous period of the Cold War.

Francis J. Gavin is Giovanni Agnelli Distinguished Professor and Director of the Henry A. Kissinger Center for Global Affairs at SAIS-Johns Hopkins University. He is editor of The New York Times Twentieth Century in Review: The Cold War and coeditor of The Presidential Recordings: John F. Kennedy: The Great Crises, volumes 1-2.
For more information about Francis J. Gavin, visit the Author Page.

"Policymakers and academics can learn important lessons from Gold, Dollars, and Power about the possibilities and limits of international monetary diplomacy in a global economy."--International Journal

“Gavin’s book represents a sophisticated effort to integrate international economic events, political science theories, and diplomatic history. It rests on extensive research in American and European archival sources and documents. It offers rich detail on competing bureaucratic interests in four presidential administrations. And, it responds to scholars who believe the Bretton Woods system was an instrument of a post-World War II American empire. . . . A significant book."--The Journal of American History

“Gavin significantly contributes to our understanding by making clear how early in the history of the Bretton Woods system its flaws were apparent to American policymakers. In addition, he skillfully explicates how differences within the Atlantic community over international monetary policy contributed to intramural wrangling on issues such as the bankrolling of U.S. occupation troops in Western Europe. Gavin is a fine writer who deftly handles the sometimes arcane elements of monetary policy. His research is multiarchival, [drawing] on recently declassified documents in both the United States and Europe.”--H-Diplo

“Gavin should be applauded for clarifying a significant part of cold war history, and the figures who made it.”--The International History Review

“Gavin presents the chaos and decline of the Bretton Woods system in an accessible, readable, quite enjoyable narrative. Not a well-structured and well managed monetary system, Bretton Woods was a contentious, politicized, volatile arena full of clashes among the US, Germany, Britain, and France. As such, monetary relations reveal much about what lies below the surface of traditional, security-focused accounts of Cold War allies.”--Choice