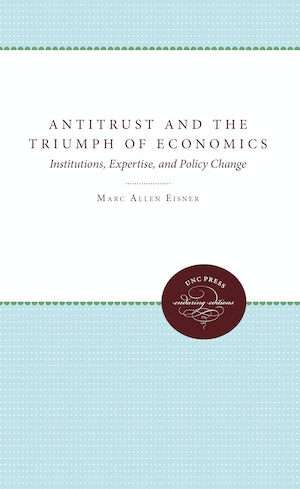 Some of the chief aims of President Ronald Reagan's economic agenda were to reduce the "regulatory burden," minimize state intervention, and reinvigorate market mechanisms. Toward these ends, his administration limited antitrust enforcement to technical cases of price-fixing, invoking the doctrine of the Chicago school of economics. In Antitrust and the Triumph of Economics, Marc Eisner shows that the so-called "Reagan revolution" was but an extension of well-established trends. He examines organizational and procedural changes in the Antitrust Division of the Department of Jusice and the Federal Trade Commission that predated the 1980 election and forced the subsequent redefinition of policy.

During their early years, the Antitrust Division and the FTC gave little attention to economic analysis. In the period following World War II, however, economic analysis assumed an increasingly important role in both agencies, and economists rose in status from being members of support staff to being pivotal decision makers who, in effect, shaped the policies for which elected officials were generally assumed to be responsible.

In the 1960s and 1970s, critical shifts in prevailing economic theory within the academic community were transmitted into the agencies. This had a profound effect on how antitrust was conceptualized in the federal government. Thus, when Ronald Reagan became president in 1981, the antitrust agencies were already pursuing a conservative enforcement program.

Eisner's study challenges dominant explanations of policy change through a focus on institutional evolution. It has important implications for current debates on the state, professionalization, and the delegation of authority.

"An admirably thorough and perceptive account of the development of antitrust policy. Pointing out the limitations of current theories of regulatory politics, it not only demonstrates the crucial influence of analysts and professionals, but shows how that influence makes public policy hostage to the moods and fashions of academe. It will become a standard citation in literature on antitrust, regulatory politics, and professionalism."--Paul J. Quirk, University of Illinois, Institute of Government and Public Affairs

"Solidly contributes to the political- institutional approach to policy-making. . . . [Eisner] provides excellent descriptive overviews of change in the law, policy, and institutions of antitrust and of the content of relevant economic expertise."--American Journal of Sociology