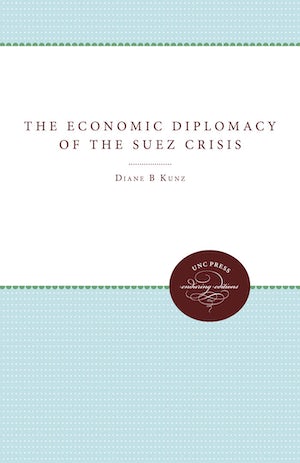 Diane Kunz describes here how the United States employed economic diplomacy to affect relations among states during the Suez Crisis of 1956-57. Using political and financial archival material from the United States and Great Britain, and drawing from personal interviews with many of the key players, Kunz focuses on how economic diplomacy determined the course of events during the crisis from start to finish. In doing so, she provides both an excellent case study of the role of economic sanctions in international relations and a solid treatment of the American use of such sanctions against a Middle Eastern country.

The crisis was prompted by the Eisenhower administration's decision not to fund the Aswan High Dam, triggering the takeover of the Suez Canal Company by Egyptian President Gamal Abdel Nasser. Responding to events, the American government imposed economic sanctions against Great Britain, France, Egypt, and Israel, with varying degrees of success.

Because of its weakened financial position and misguided decisions, Kunz says, the government of British Prime Minister Anthony Eden proved most vulnerable to these tactics. Indeed, American economic pressure caused the British government to withdraw its troops ignominiously from Egypt. France, on the other hand, had borrowed sufficiently prior to the crisis to be able to withstand American pressure. For Israel, Kunz says, the threat of sanctions symbolized the Eisenhower administration's wrath. Israel could forego American funds, but, dependent on the goodwill of a great power for survival, it could not take a stand that would completely alienate the United States. Only Egypt proved immune to financial warfare.

Kunz also illuminates the general diplomacy of the Suez crisis. The American government was determined neither to alienate moderate Arab opinion nor to become too closely intertwined with Israel. As such, this account has significant lessons for American policy.

"A fascinating account of economic and political diplomacy leading up to and surrounding the Suez crisis of 1956-57, especially the role of the Eisenhower administration."--Choice

"A fascinating contribution to the story of Britain's attempt to maintain its role as an economic world power, of the uses of and limitations on U.S. economic power and, more generally, of the role of economic matters in modern diplomacy."--Roger Owen, St. Antony's College, Oxford University

"An economic reappraisal of the Suez crisis of such incisiveness that the book will become a classic."--William Roger Louis, University of Texas at Austin