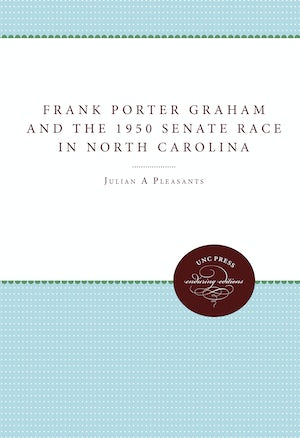 The tumultuous North Carolina Senate primaries of 1950 are still viewed as the most bitter chapter in the state's modern political history. The central figure in that frenzied race was the appointed incumbent, Frank Porter Graham, former president of the University of North Carolina (1931-49) and liberal activist of national stature.

As a Senate candidate, Graham was unrelentingly attacked for both his social activism and his racial views, and the vicious tactics used against him shocked his supporters and alarmed national observers. Peeling away the myths that have accumulated over the years, the authors present the first thoroughly researched account of Graham's eventual defeat by Raleigh attorney Willis Smith. The result, a balanced study of North Carolina politics at mid-century, is a convincing explanation of the 1950 election.

Using the campaign as a prism, the authors assess the factional struggles within the state, showing that Graham was defeated by a massive loss of support among white voters in eastern North Carolina. The principal force behind this switch was the fear promulgated by the Smith campaign that a vote for Graham was a vote to end statutory segregation in North Carolina. The authors also offer the fullest portrait to date of Frank Porter Graham as political candidate and social reformer. They examine his career as an educator and public activist, the steps that led to his unorthodox appointment, and his strengths and weaknesses as a political candidate.

Frank Porter Graham and the 1950 Senate Race in North Carolina is based on manuscript materials never before examined, on interviews with more than 50 campaign participants and associates of both Graham and Smith, and on a thorough analysis of newspaper coverage and campaign literature.

"One of the great tales of postwar American politics, now told for the first time at book length . . . with admirable perception and even, from time to time, a bit of panache."--Washington Post