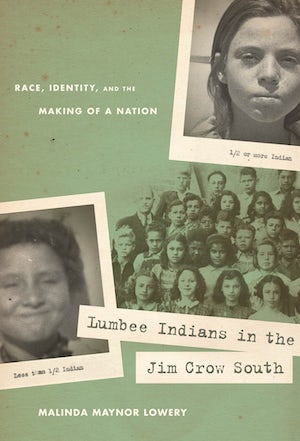 With more than 50,000 enrolled members, North Carolina's Lumbee Indians are the largest Native American tribe east of the Mississippi River. Malinda Maynor Lowery, a Lumbee herself, describes how, between Reconstruction and the 1950s, the Lumbee crafted and maintained a distinct identity in an era defined by racial segregation in the South and paternalistic policies for Indians throughout the nation. They did so against the backdrop of some of the central issues in American history, including race, class, politics, and citizenship.

Lowery argues that "Indian" is a dynamic identity that, for outsiders, sometimes hinged on the presence of "Indian blood" (for federal New Deal policy makers) and sometimes on the absence of "black blood" (for southern white segregationists). Lumbee people themselves have constructed their identity in layers that tie together kin and place, race and class, tribe and nation; however, Indians have not always agreed on how to weave this fabric into a whole. Using photographs, letters, genealogy, federal and state records, and first-person family history, Lowery narrates this compelling conversation between insiders and outsiders, demonstrating how the Lumbee People challenged the boundaries of Indian, southern, and American identities.

A project of First Peoples: New Directions in Indigenous Studies; published with the assistance of the Center for the Study of the American South at the University of North Carolina at Chapel Hill

“Lowery’s arguments deserve thoughtful consideration not only by Americanist historians and scholars of native/indigenous studies but by officials, journalists, and anyone who presumes to know what makes or does not make a people ‘Indian.’” --Journal of American History

"Lowery bravely dissects the historical struggles of the Lumbees, with insights applicable to all non-treaty Native peoples. . . . Highly recommended."--Choice

"Unflinching and even-handed analysis. . . . Lowery's book is particularly useful to scholars focusing on southeastern Native people, nonfederally recognized Indigenous communities, and the complex and often contradictory relationships between Native and black communities in the United States."--Studies in American Indian Literatures

"[An] important new book. . . . Extraordinarily detailed. . . . Superbly written. . . . A masterful discussion . . . that will be the standard treatment for decades to come."--North Carolina Historical Review

“The book’s richness, wide range of archival sources, and complex treatment of identity make it an important work for scholars and teachers interested in both southern and Indian history.”--Agricultural History