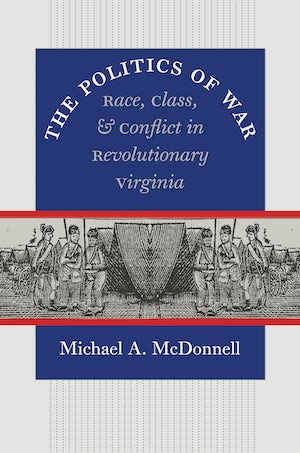 War often unites a society behind a common cause, but the notion of diverse populations all rallying together to fight on the same side disguises the complex social forces that come into play in the midst of perceived unity. Michael A. McDonnell uses the Revolution in Virginia to examine the political and social struggles of a revolutionary society at war with itself as much as with Great Britain.

McDonnell documents the numerous contests within Virginia over mobilizing for war--struggles between ordinary Virginians and patriot leaders, between the lower and middle classes, and between blacks and whites. From these conflicts emerged a republican polity rife with racial and class tensions.

Looking at the Revolution in Virginia from the bottom up, The Politics of War demonstrates how contests over waging war in turn shaped society and the emerging new political settlement. With its insights into the mobilization of popular support, the exposure of social rifts, and the inversion of power relations, McDonnell's analysis is relevant to any society at war.

"Required reading for students of the American Revolution."--The Historian

"One of the strongest demonstrations yet of the inseparability of the social from the political questions of the Revolutionary era. . . . Captures the texture and the ironies of the home front in what might best be called the first civil war."--Journal of Southern History

"Demands careful reading by all who write or care about eighteenth-century Virginia."--The Journal of American History

"There is much that is fresh and valuable in this book."---American Historical Review

"A big book in every sense of the word. . . . Contribute[s] greatly to the social history of the Revolutionary War. . . . Our sense of what the Revolution was and was not is considerably better now than it was before McDonnell's substantial achievement."--William and Mary Quarterly

"One of the more important recent additions to American colonial and Revolutionary historiography."--Journal of the Early Republic