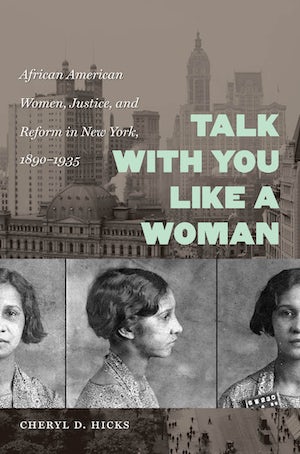 With this book, Cheryl Hicks brings to light the voices and viewpoints of black working-class women, especially southern migrants, who were the subjects of urban and penal reform in early-twentieth-century New York. Hicks compares the ideals of racial uplift and reform programs of middle-class white and black activists to the experiences and perspectives of those whom they sought to protect and, often, control.

In need of support as they navigated the discriminatory labor and housing markets and contended with poverty, maternity, and domestic violence, black women instead found themselves subject to hostility from black leaders, urban reformers, and the police. Still, these black working-class women struggled to uphold their own standards of respectable womanhood. Through their actions as well as their words, they challenged prevailing views regarding black women and morality in urban America. Drawing on extensive archival research, Hicks explores the complexities of black working-class women's lives and illuminates the impact of racism and sexism on early-twentieth-century urban reform and criminal justice initiatives.

Cheryl D. Hicks is assistant professor of history at the University of North Carolina at Charlotte.
For more information about Cheryl D. Hicks, visit the Author Page.

“[Hicks] gives voice to women who have not been studied thus far. Recommended. Undergraduate and graduate studies.” --Choice

"A masterly study of black women, reform, and the criminal justice system."--Journal of American History

“A remarkable collection of individual stories . . . . Hicks succeeds in opening up a new conversation about early twentieth-century New York, one in which black working-class women’s voices are finally heard.”--American Historical Review

"An excellent, often riveting series of portraits of working-class black women in New York City whose lives intersect with social reform, city policing, the first sexual revolution, and the great migration of southern African Americans to the North. Hicks provides an ambitious and important corrective to the scant treatment of these women by academic historians."--Patricia Schechter, Portland State University

"This creative, cross-disciplinary book will make significant contributions to African American and women's history, as well as sociology and legal studies. Hicks brings a fresh perspective to under-researched topics and much-needed revision to long-held assumptions about the dynamics of class and moral reform issues among African Americans."--Tera Hunter, author of To 'Joy My Freedom: Southern Black Women's Lives and Labors after the Civil War