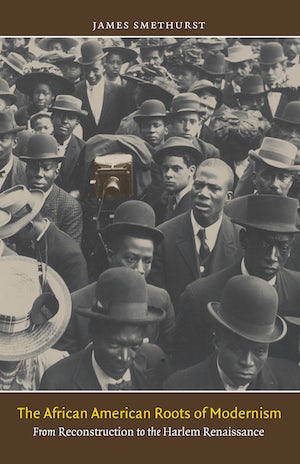 In identifying the Jim Crow period with the coming of modernity, Smethurst upsets the customary assessment of the Harlem Renaissance as the first nationally significant black arts movement, showing how artists reacted to Jim Crow with migration narratives, poetry about the black experience, black performance of popular culture forms, and more. Smethurst introduces a whole cast of characters, including understudied figures such as William Stanley Braithwaite and Fenton Johnson, and more familiar authors such as Charles Chesnutt, Pauline Hopkins, and James Weldon Johnson. By considering the legacy of writers and artists active between the end of Reconstruction and the rise of the Harlem Renaissance, Smethurst illuminates their influence on the black and white U.S. modernists who followed.

James Smethurst is associate professor of Afro-American studies at the University of Massachusetts-Amherst.
For more information about James Smethurst, visit the Author Page.

“A richly insightful and informative account of the often occluded racial dynamics of early modernism, and . . . of the development of an American literature of urban modernity.”--Journal of American Studies

“Smethurst recalibrates our understanding of why American modernism emerged and how its complex, literary characteristics evolved.”--Southern Historian

"Meticulously researched and deeply insightful, The African American Roots of Modernism is an entirely fresh look at the role of African American literature and culture in the formation of American modernism."--Margo Natalie Crawford, Cornell University

"Not long after illuminating the national reach of the Black Arts movement, James Smethurst is back with another rock-solid yet inventive work of U.S. cultural history. The African American Roots of Modernism persuasively argues that a distinctive Afro-modernist literature emerged in advance of Harlem's famous renaissance. What's more, it clinches the case that the specter of Jim Crow is the great unsaid behind the invention of American modernism in general."--William J. Maxwell, Washington University in St. Louis