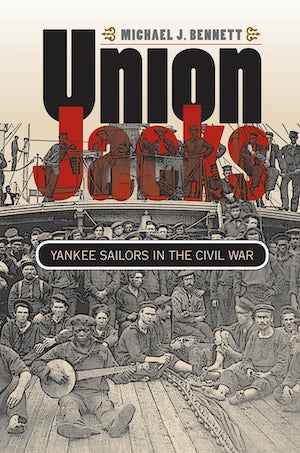 Historians have given a great deal of attention to the lives and experiences of Civil War soldiers, but surprisingly little is known about navy sailors who participated in the conflict. Michael J. Bennett remedies the longstanding neglect of Civil War seamen in this comprehensive assessment of the experience of common Union sailors from 1861 to 1865.

To resurrect the voices of the "Union Jacks," Bennett combed sailors' diaries, letters, and journals. He finds that the sailors differed from their counterparts in the army in many ways. They tended to be a rougher bunch of men than the regular soldiers, drinking and fighting excessively. Those who were not foreign-born, escaped slaves, or unemployed at the time they enlisted often hailed from the urban working class rather than from rural farms and towns. In addition, most sailors enlisted for pragmatic rather than ideological reasons.

Bennett's examination provides a look into the everyday lives of sailors and illuminates where they came from, why they enlisted, and how their origins shaped their service. By showing how these Union sailors lived and fought on the sea, Bennett brings an important new perspective to our understanding of the Civil War.

"An outstanding contribution to the fields of the American Civil War, U.S. Military History, naval history, as well as the history of race, ethnicity, and class in nineteenth-century America. . . . Recommended for classroom use as well as general readers."--Florida Historical Quarterly

"A remarkably effective job of capturing the voices of ordinary sailors. . . . A gem, joining social history methodology with the vivid story-telling loved by Civil War buffs."--Military History of the West

"Will prove very useful to anyone interested in the naval side of the Civil War, and in the life of the ordinary man in the service."--The NYMAS Review

"An innovative and thoughtful approach to a unique group of Americans. . . . Outstanding. . . . A thought-provoking bridge between antebellum and Civil War social history."--Journal of African American History

"An important new book. . . . A mine of information that turns many assumptions upside down. No doubt it will be widely read and discussed by scholars in the months and years to come. It is clearly an important milestone in the historiography of the war at sea."--North & South

"Michael Bennett set out to write 'a social history of the bluejackets' in the Civil War and has succeeded magnificently. Indeed, his book not only fills a yawning gulf in Civil War scholarship, it also offers fresh insights into race relations as well as the origins of 'Hard War.' It is certain to take its place as an essential work on the Civil War Navy."--Blue & Gray