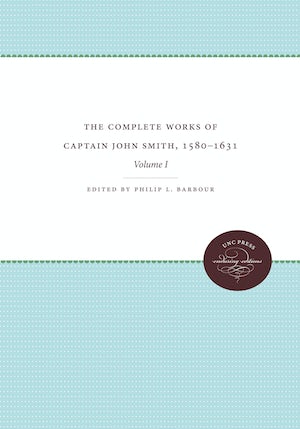 Edited by the late Philip L. Barbour, acknowledged as the leading authority on Captain John Smith, this annotated three-volume work is the only modern edition of the works of the legendary figure who captured the interest of scholars and general readers for over four centuries. A hero and adventurer, Smith was the leader who saved Jamestown from self-destruction, and he was also instrumental in the exploration and settlement of New England. He produced one of the basic ethnological studies of the tide-water Algonkians, an invaluable contemporary history of early Virginia, the earliest well-defined maps of Chesapeake Bay and the New England coast, and the first printed dictionary of English nautical terms. This is Volume I of three volumes.

The late Philip L. Barbour was a specialist in American Indian linguistics and English expansion of the seventeenth century. He is the author of The Three Worlds of Captain John Smith and the editor of The Jamestown Voyages.
For more information about Philip L. Barbour, visit the Author Page.