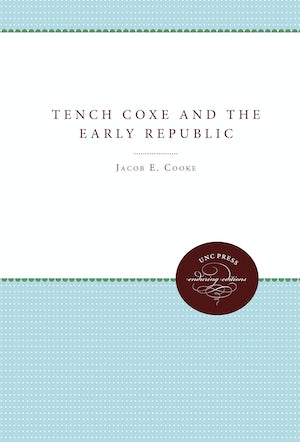 Tench Coxe participated in or commented on most of the major events in American history from the Revolution to the 1820s. His long career of public involvement embodies many of the significant historical themes of the time: he was a Philadelphia aristocrat, a loyalist out of opportunism, a merchant during the period of economic adjustment in the 1780s, a grandiose land speculator, a Federalist with Alexander Hamilton and later a Republican with Thomas Jefferson, a nationalist theorist, a major prophet of industrial growth, and a prolific journalist. As this biography conclusively demonstrates, Coxe's role was considerably more consequential in the early history of the nation than has hitherto been supposed.

Coxe's career is more interesting because it is paradoxical. Although he persistently aspired to fame as a public official, the posthumous recognition he has received is the result of his extensive writings on economic and mercantile policy. This volume expecially emphasizes Coxe's farsighted views and achievements as a political economist: his support of protective tarrifts, his advocacy of laborsaving machinery, and his prescient belief that cotton growing was the key to American economic independence and industrialization.

Based on more than a decade's work in the voluminous collection of Coxe Papers, to which Jacob Cooke was given exclusive access, this biography provides much information on the operations of the Treasury Department under Alexander Hamilton, whom Coxe served as assistant secretary, and on the development of political parties. A Federalist apostate, Coxe was representative of a small but historically significant wing of his party that enthusiastically endorsed the fiscal policies of Hamilton while championing the commercial policies of Jefferson. Coxe openly became one of the Virginian's most active supporters, as a state party leader, national campaign coordinator, and partisan polemicist.

Yet in the course of his career Coxe managed to alienate Jefferson and most of his other powerful associates, including Hamilton and John Adams. These men and others have left damaging portraits of Coxe. Professor Cooke examines the paradox presented by such uncomplimentary assessments of a man of uncommon ability and conspicuous accomplishments and at the same time opens for readers many new views of the stage upon which Tench Coxe played out his frustrated ambitions -- the whole political and economic life of the early Republic.

"Provides the reader with profound insights into the mind of an extraordinary figure--businessman, land speculator, economic theorist, and Treasury aide."--Richard B. Morris, Gouverneur Morris Professor Emeritus of History, Columbia University