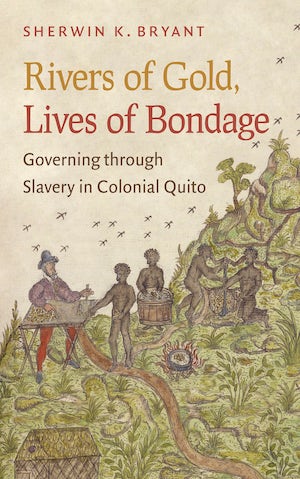 In this pioneering study of slavery in colonial Ecuador and southern Colombia--Spain's Kingdom of Quito--Sherwin Bryant argues that the most fundamental dimension of slavery was governance and the extension of imperial power. Bryant shows that enslaved black captives were foundational to sixteenth-century royal claims on the Americas and elemental to the process of Spanish colonization. Following enslaved Africans from their arrival at the Caribbean port of Cartagena through their journey to Quito, Bryant explores how they lived during their captivity, formed kinships and communal affinities, and pressed for justice within a slave-based Catholic sovereign community.

In Cartagena, officials branded African captives with the royal insignia and gave them a Catholic baptism, marking slaves as projections of royal authority and majesty. By licensing and governing Quito's slave trade, the crown claimed sovereignty over slavery, new territories, natural resources, and markets. By adjudicating slavery, royal authorities claimed to govern not only slaves but other colonial subjects as well. Expanding the diaspora paradigm beyond the Atlantic, Bryant's history of the Afro-Andes in the early modern world suggests new answers to the question, what is a slave?