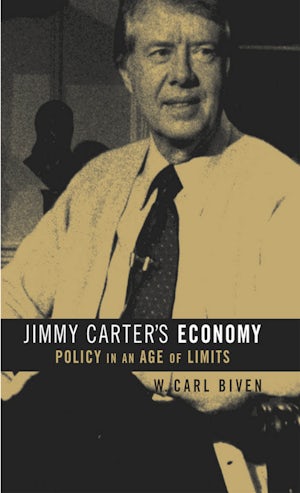 The massive inflation and oil crisis of the 1970s damaged Jimmy Carter's presidency. In Jimmy Carter's Economy, Carl Biven traces how the Carter administration developed and implemented economic policy amid multiple crises and explores how a combination of factors beyond the administration's control came to dictate a new paradigm of Democratic Party politics.

Jimmy Carter inherited a deeply troubled economy. Inflation had been on the rise since the Johnson years, and the oil crisis Carter faced was the second oil price shock of the decade. In addition, a decline in worker productivity and a rise in competition from Germany and Japan compounded the nation's economic problems. The resulting anti-inflation policy that was forced on Carter included controlling public spending, limiting the expansion of the welfare state, and postponing popular tax cuts. Moreover, according to Biven, Carter argued that the ambitious policies of the Great Society were no longer possible in an age of limits and that the Democratic Party must by economic necessity become more centrist.

W. Carl Biven is professor emeritus of economics at the Georgia Institute of Technology. His previous books include Who Killed John Maynard Keynes?: Conflicts in the Evolution of Economic Policy.
For more information about W. Carl Biven, visit the Author Page.

"W. Carl Biven offers a deeply researched, fine-grained history of policy-making in the Carter administration . . . Jimmy Carter's Economy makes a valuable contribution to the history of public policy and economic thought in this crucial period. . . . [Biven's] book puts important evidentiary flesh on what had remained a skeletal interpretation of the Carter administration as a transitional presidency."--Journal of Southern History

"A nicely detailed and thoughtful account of economic policy during the Carter administration. . . . A much more nuanced and ultimately accurate portrait of the Carter years than presented by those who perceive the former president as politically unskilled and incapable of developing sound policy. . . . Highly recommended."--Choice

"Biven has provided us with an insightful study of Carter's long-term significance for American political economy that should be welcomed by everyone with an interest in American economics and politics in the late twentieth century."--Economic History Review

"Biven here provides a cogent and compelling interpretation that is more a critical lamentation than an exercise in special pleading. The result is a first-rate piece of scholarship."--Georgia Historical Quarterly

"Carl Biven has written the definitive account of how inflation helped to destroy the presidency of Jimmy Carter. Biven knows his economics and his politics. He handles the complex issues of money, energy, and the international economy with clarity and grace. And he has mastered a vast body of archival evidence. One of the best case studies we have of policy making in the White House, Biven's book will be indispensable reading for policy analysts, students of the Carter presidency, and anyone interested in the recent history of the American economy."--Allen J. Matusow, Rice University