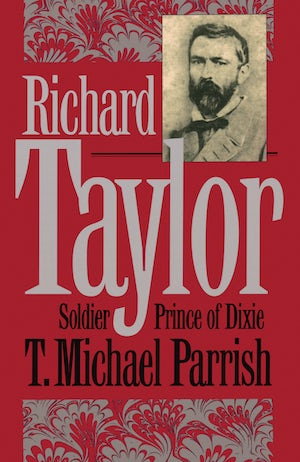 Using widely scattered and previously unknown primary sources, Parrish's biography of Confederate general Richard Taylor presents him as one of the Civil War's most brilliant generals, eliciting strong performances from his troops in the face of manifold obstacles in three theaters of action.

"An engaging and exhaustively researched biography of an important and intriguing, though rarely studied, Confederate leader."--Kirkus Reviews

"Son of a president, plantation aristocrat, distinguished soldier, and author of an oft-quoted memoir, Richard Taylor epitomized much of what was the Southern Confederacy. Michael Parrish has not merely assembled a wealth of information on Taylor; in this long-needed biography, Parrish has as well caught the excitement and the achievements of Taylor as no previous writer ever has."--James I. Robertson, Jr., Virginia Polytechnic Institute and State University

"Richard Taylor has long been a neglected Confederate hero. In Richard Taylor: Soldier Prince of Dixie, T. Michael Parrish at last gives Taylor his due. . . . This is good biography and fine military history. Especially valuable are the sections on Taylor's service in the Trans-Mississippi Confederacy and his heroic efforts to sustain the South during the last months of war."--Frank E. Vandiver, Texas A&M University