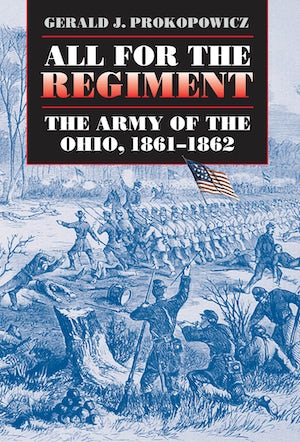 Despite its important role in the early years of the Civil War, the Army of the Ohio remains one of the least studied of all Union commands. With All for the Regiment, Gerald Prokopowicz deftly fills this surprising gap. He offers an engaging history of the army from its formation in 1861 to its costly triumph at Shiloh and its failure at Perryville in 1862.

Prokopowicz shows how the amateur soldiers who formed the Army of the Ohio organized themselves into individual regiments of remarkable strength and cohesion. Successive commanders Robert Anderson, William T. Sherman, and Don Carlos Buell all failed to integrate those regiments into an effective organization, however. The result was a decentralized and elastic army that was easily disrupted and difficult to command--but also nearly impossible to destroy in combat.

Exploring the army's behavior at minor engagements such as Rowlett's Station and Logan's Cross Roads, as well as major battles such as Shiloh and Perryville, Prokopowicz reveals how its regiment-oriented culture prevented the army from experiencing decisive results--either complete victory or catastrophic defeat--on the battlefield. Regimental solidarity was at once the Army of the Ohio's greatest strength, he argues, and its most dangerous vulnerability.

"A superb and insightful study. . . . Well worth reading and owning, especially by those interested in military leadership, cohesion, and fighting power in the Civil War."--Military History

"An insightful, ground-breaking study of that army's organization, training, and institutional culture. . . . This is an interesting addition to Civil War scholarship and opens the door for much additional study."--Blue & Gray Magazine

"All for the Regiment provides every student of the Civil War with an engaging examination into the nature of applied violence and human behavior."--Gulf South Historical Review

"The first history of the Army of the Ohio published since the nineteenth century. . . . [Prokopowicz] provides a window to understanding the Civil War in a new light. . . . Prokopowicz is to be commended. . . . [He] challenges Civil War scholars to advance the study of Civil War armies."--Journal of Southern History

"An insightful and incisive analysis of Civil War military culture, of the disorganization of Civil War armies--the key to their sloppy, indecisive, and deadly performances. This is an excellent anti-romance, original and unusual in approach and refreshingly honest."--Michael Fellman, author of The Making of Robert E. Lee