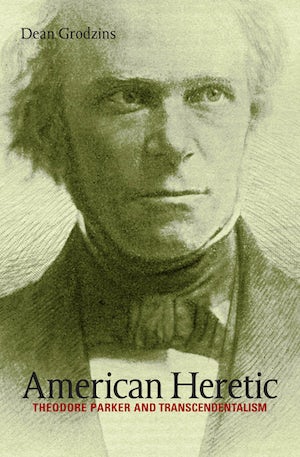 Theodore Parker (1810-1860) was a powerful preacher who rejected the authority of the Bible and of Jesus, a brilliant scholar who became a popular agitator for the abolition of slavery and for women's rights, and a political theorist who defined democracy as "government of all the people, by all the people, for all the people"--words that inspired Abraham Lincoln. Parker had more influence than anyone except Ralph Waldo Emerson in shaping Transcendentalism in America.

The manuscript of this book was awarded the Allan Nevins Prize by the Society of American Historians.

Dean Grodzins is a visiting scholar at the Massachusetts Historical Society.
For more information about Dean Grodzins, visit the Author Page.

"Skillfully traces Parker's intellectual evolution. . . . A masterful treatment of Parker's life and times. . . . A fresh look at an important figure in American religious history."--Journal of the American Academy of Religion

"Grodzins brilliantly brings Parker to life. . . . [his] rich and textured portrait is buttressed by meticulous scholarship: He has left no available book or journal unopened. . . . Great fun: an elegant, deeply scholarly work that by turns reads like a coming-of-age novel, a conversion narrative, a tragic historical romance, and an intellectual odyssey. . . . A dazzling--and essential--read."--UU World

"Grodzins has written what is without a doubt the definitive treatment of the early life of Theodore Parker. . . . For its sheer scale, depth of research, level of clarity, and more, it stands as quite an achievement."--H-SHEAR

"This book uncovers so much new evidence and produces so many gems of original insight into Parker's brilliant yet complex personality that any reader interested in the social or intellectual aspects of the period should profit greatly."--American Historical Review