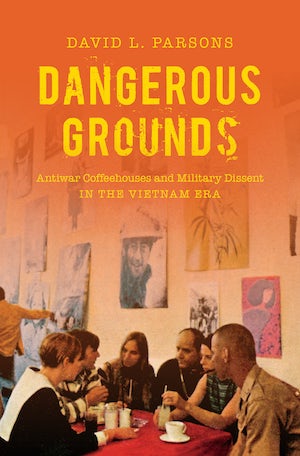 As the Vietnam War divided the nation, a network of antiwar coffeehouses appeared in the towns and cities outside American military bases. Owned and operated by civilian activists, GI coffeehouses served as off-base refuges for the growing number of active-duty soldiers resisting the war. In the first history of this network, David L. Parsons shows how antiwar GIs and civilians united to battle local authorities, vigilante groups, and the military establishment itself by building a dynamic peace movement within the armed forces.

Peopled with lively characters and set in the tense environs of base towns around the country, this book complicates the often misunderstood relationship between the civilian antiwar movement, U.S. soldiers, and military officials during the Vietnam era. Using a broad set of primary and secondary sources, Parsons shows us a critical moment in the history of the Vietnam-era antiwar movement, when a chain of counterculture coffeehouses brought the war's turbulent politics directly to the American military's doorstep.