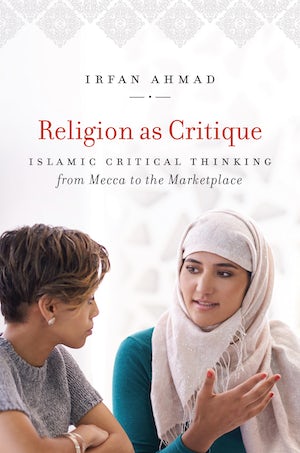 Not for Sale in Pakistan, India, Sri Lanka & ASEAN Countries

To purchase online via an independent bookstore, visit Bookshop.org
Irfan Ahmad makes the far-reaching argument that potent systems and modes for self-critique as well as critique of others are inherent in Islam--indeed, critique is integral to its fundamental tenets and practices. Challenging common views of Islam as hostile to critical thinking, Ahmad delineates thriving traditions of critique in Islamic culture, focusing in large part on South Asian traditions. Ahmad interrogates Greek and Enlightenment notions of reason and critique, and he notes how they are invoked in relation to “others,” including Muslims. Drafting an alternative genealogy of critique in Islam, Ahmad reads religious teachings and texts, drawing on sources in Hindi, Urdu, Farsi, and English, and demonstrates how they serve as expressions of critique. Throughout, he depicts Islam as an agent, not an object, of critique.

On a broader level, Ahmad expands the idea of critique itself. Drawing on his fieldwork among marketplace hawkers in Delhi and Aligarh, he construes critique anthropologically as a sociocultural activity in the everyday lives of ordinary Muslims, beyond the world of intellectuals. Religion as Critique allows space for new theoretical considerations of modernity and change, taking on such salient issues as nationhood, women’s equality, the state, culture, democracy, and secularism.

Irfan Ahmad, an anthropologist and senior research fellow at the Max Planck Institute for the Study of Religious and Ethnic Studies in Göttingen, Germany, is the author of Islamism and Democracy in India: The Transformation of Jamaat-e-Islami.
For more information about Irfan Ahmad, visit the Author Page.

“[Irfan] Ahmad has written an important, sophisticated, and provocative book. This book stands in the best tradition of contemporary Islamic studies.”--Marginalia: Los Angeles Review of Books

“Religion as Critique is literally a tour de force that combines different objectives around the central axis of showing how believers in Islam act as ‘dynamic agents . . . of critique’.”--South Asia: Journal of South Asian Studies

“Original and compelling . . . This important text will be of interest to a wide range of scholars from the social sciences to the humanities committed to better understanding what a postcolonial ethic toward scholarship on Muslims and Islam in the context of rising Islamophobia might look like.”--Nova Religio

“The book is written in a passionate and engaging style and can easily persuade the reader to finish it at a sitting as its vocabulary is rich and varied and its rhetoric well-crafted, illustrated with poetry, proverbs and personal anecdotes. . . . This book is at once a challenging and exciting work.”--Islam and Christian-Muslim Relations

“Thoughtful, nuanced, questioning, exploratory, Religion as Critique: Islamic Critical Thinking from Mecca to the Marketplace is a brave book and a timely one.”--The Hindu

“Ahmad writes as both a philosopher and an anthropologist. . . . What Ahmad does in assessing Abdul Ghaffar Khan is nothing short of revisionism at its most extreme, and daring, pinnacle. . . . Irfan Ahmad deserves the acclaim that . . . Khan has been denied, but may now regain, in part thanks to this lucid, imaginative analysis of his life, his movement, and his legacy.”--Critical Research on Religion