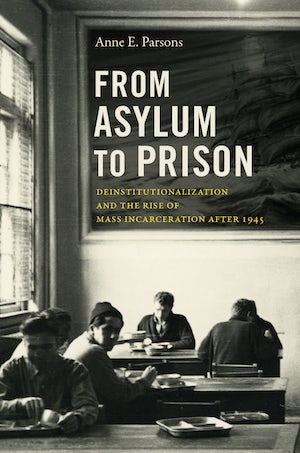 To many, asylums are a relic of a bygone era. State governments took steps between 1950 and 1990 to minimize the involuntary confinement of people in psychiatric hospitals, and many mental health facilities closed down. Yet, as Anne Parsons reveals, the asylum did not die during deinstitutionalization. Instead, it returned in the modern prison industrial complex as the government shifted to a more punitive, institutional approach to social deviance. Focusing on Pennsylvania, the state that ran one of the largest mental health systems in the country, Parsons tracks how the lack of community-based services, a fear-based politics around mental illness, and the economics of institutions meant that closing mental hospitals fed a cycle of incarceration that became an epidemic.

This groundbreaking book recasts the political narrative of the late twentieth century, as Parsons charts how the politics of mass incarceration shaped the deinstitutionalization of psychiatric hospitals and mental health policy making. In doing so, she offers critical insight into how the prison took the place of the asylum in crucial ways, shaping the rise of the prison industrial complex.

Anne E. Parsons is assistant professor of history at the University of North Carolina at Greensboro, where she serves as the director of Public History.
For more information about Anne E. Parsons, visit the Author Page.

“Parsons has written an excellent book about hopes, frustrations, and failures of deinstitutionalization and decarceration—one that will be of interest to historians, sociologists, psychologists and psychiatrists, policy makers, and students of disability studies.”--Journal of the History of Medicine

“[A] finely detailed assessment . . . Parsons places punitive shifts in criminal justice system perspectives and practice . . . at the forefront of the increased use of jails and prisons for mentally ill or psychiatrically disabled persons.”--ICCA Journal

“An important work that urges scholars to consider how the contemporary mass incarceration crisis and overincarceration of people with mental illness in the United States has roots in a longer history of state-funded custodial institutions. . . . This book should garner much discussion in graduate seminars and would be a valuable read for anyone interested in the history of psychiatry, institutions, and the carceral state.”--H-Net Reviews

“Parsons advances the compelling argument that a history of deinstitutionalization must be understood as inextricably intertwined with a history of mass incarceration in the United States. . . . As From Asylum to Prison powerfully demonstrates, the racialized and punitive political calculus that drove state and federal policies toward mass incarceration in the 1980s still persists – largely unrevised and too often unchallenged – to the present day.”--Journal of Social History

“From Asylum to Prison definitively shows that asylums must be considered part of the carceral state—and that their ‘deinstitutionalization’ was less about shuttering asylums than it was repurposing them into prisons. The story of the country's move from asylum to prisons is one of reinstitutionalization rather than deinstitutionalization, not one of emptying institutions but shifting their function toward even more punitive ends.”--Reviews in American History

“From Asylum to Prison joins a rich and growing literature on the history of the American carceral state. By centering the post-World War II expansion of the U.S. prison system squarely within the history of deinstitutionalization, Parsons reminds readers that mass incarceration, far from being a distinct historical phenomenon, has deep historical roots outside the halls of the criminal legal system. At the same time, however, as Parsons is contending with an ongoing social and political problem in the U.S., From Asylum to Prison demonstrates . . . the potentially life-changing value of historical research for the present and future.”--The History Teacher