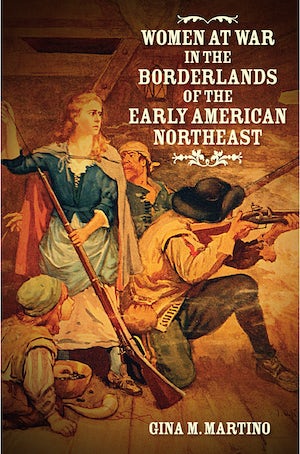 Across the borderlands of the early American northeast, New England, New France, and Native nations deployed women with surprising frequency to the front lines of wars that determined control of North America. Far from serving as passive helpmates in a private, domestic sphere, women assumed wartime roles as essential public actors, wielding muskets, hatchets, and makeshift weapons while fighting for their families, communities, and nations. Revealing the fundamental importance of martial womanhood in this era, Gina M. Martino places borderlands women in a broad context of empire, cultural exchange, violence, and nation building, demonstrating how women's war making was embedded in national and imperial strategies of expansion and resistance. As Martino shows, women's participation in warfare was not considered transgressive; rather it was integral to traditional gender ideologies of the period, supporting rather than subverting established systems of gender difference.

In returning these forgotten women to the history of the northeastern borderlands, this study challenges scholars to reconsider the flexibility of gender roles and reveals how women's participation in transatlantic systems of warfare shaped institutions, polities, and ideologies in the early modern period and the centuries that followed.

Gina M. Martino is assistant professor of history at the University of Akron.
For more information about Gina M. Martino, visit the Author Page.

“This book is a valuable addition to the scholarship of early America, women and gender studies, and borderland history, as it more fully illuminates women’s active martial activities than previous studies of this time and place. It is also useful to those seeking a better understanding of how later histories changed the historical narrative to support late-18th- and early-19th-century gendered ideologies.”--Choice

“Martino’s slim volume elucidates the complex place of colonial women along with the changing official attitudes to these women’s actions. . . . Truly an important contribution.”--American Historical Review

“Martino’s book offers an exciting example of borderlands history, drawing together diverse sources and perspectives. . . . A valuable and interesting story of change over time. . .[That] enriches our understanding of two centuries of military conflict in early America.” --Canadian Journal of History

"By focusing on women as combatants, dealing with both the seventeenth and eighteenth centuries, and incorporating Native, French, and English women as her actors, Martino decisively advances gender and women’s history toward understanding women as public actors in the general situation of colonial America."--Edward Countryman, Southern Methodist University

"Gina M. Martino's Women at War challenges well-worn assumptions about women and war, but also broader questions about colonization and empire. Through careful research and deft analysis, Martino delineates English, French, and Native women willingly complicit in violent military conflict. These women were not passive victims or observers, or even the occasional heroic interloper; but instead, invested participants. This is a compelling study, with significant implications beyond the Colonial era, promising to complicate what we think we know about war and those who actively participate in its violence and brutality." --Lesley J. Gordon, author of A Broken Regiment: The 16th Connecticut’s Civil War