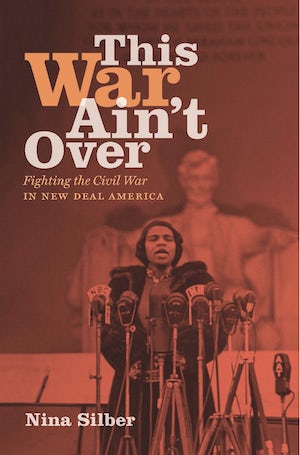 The New Deal era witnessed a surprising surge in popular engagement with the history and memory of the Civil War era. From the omnipresent book and film Gone with the Wind and the scores of popular theater productions to Aaron Copeland's "A Lincoln Portrait," it was hard to miss America's fascination with the war in the 1930s and 1940s. Nina Silber deftly examines the often conflicting and politically contentious ways in which Americans remembered the Civil War era during the years of the Depression, the New Deal, and World War II. In doing so, she reveals how the debates and events of that earlier period resonated so profoundly with New Deal rhetoric about state power, emerging civil rights activism, labor organizing and trade unionism, and popular culture in wartime.

At the heart of this book is an examination of how historical memory offers people a means of understanding and defining themselves in the present. Silber reveals how, during a moment of enormous national turmoil, the events and personages of the Civil War provided a framework for reassessing national identity, class conflict, and racial and ethnic division. The New Deal era may have been the first time Civil War memory loomed so large for the nation as a whole, but, as the present moment suggests, it was hardly the last.

Nina Silber is professor of history at Boston University and author of The Romance of Reunion: Northerners and the South, 1865-1900.
For more information about Nina Silber, visit the Author Page.

“Offers a stimulating look into Civil War memory's evolution and insight into the reverberations that continue to the present.”--H-Net Reviews

“In this brisk, engagingly written book, Silber charts the way that disparate Americans used the Civil War to frame important engagements with contemporary issues, especially with federal power, during the depression. Silber’s chapters include analyses of artists, writers, filmmakers, government officials, monument builders, trade unionists, and scores of others, both black and white.”--The Annals of Iowa

“Silber moves seamlessly from political memory to cultural memory, and the cultural memory she discusses spans a wide gamut of film and literature. . . . A necessary addition to the historiographies of both the Great Depression and memory writ large.”--Journal of Southern History

“A fascinating exploration of ‘how Americans used a troubled past,’ not just the Civil War but also slavery and Reconstruction, ‘to navigate a complicated present,” the Great Depression and World War II. . . . With thoughtful appreciation of conflicting views . . . It proves particularly wise in stressing how contemporary concerns shape historical memory more than historical memory shapes contemporary behavior.”--Journal of the Civil War Era

“Nina Silber has made an impressive contribution to the essential historical understanding of how the past influences the present and how the memory of past events, specifically the Civil War, resonated in New Deal America.”--Maryland Historical Magazine

"Nina Silber's This War Ain't Over is the best book yet written on how politics and culture mix to forge the historical memories we live by in times of national crisis. This is a sizzling account of how profusely Americans from all perspectives used Civil War memory to fight for power and policy during the Great Depression and World War II. The verdicts of Appomattox were never gone with the wind; many people only wished them so."--David W. Blight, author of Frederick Douglass: Prophet of Freedom