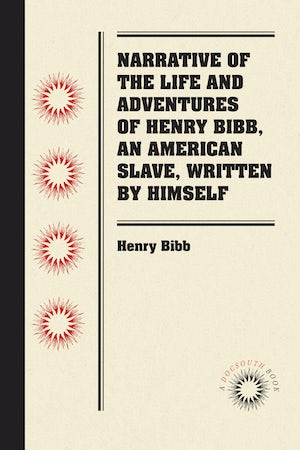 Henry Bibb (1815-1854) was born to an enslaved woman named Mildred Jackson in Shelby County, Kentucky. His father was a state senator who never acknowledged him. His narrative documents his persistent attempts to escape to freedom, beginning at age ten, offering an insider’s view of the degradation and varieties of slavery as well as its bitter legacies within families. Having finally settled in Detroit in 1842, Bibb joined the abolitionist lecture circuit and lived the rest of his days as a well-known African American activist who believed that Canada might offer a haven for the formerly enslaved.

Bibb’s autobiography, Narrative of the Life and Adventures of Henry Bibb, An American Slave, was published in 1849. Scholars have pointed out that Bibb’s narrative has several distinguishing features among the larger body of slave narratives. Unusually, Bibb survived enslavement in the Deep South and later described it, and his narrative offers documentation of African folkways including conjuring and an account of Native American slaveholding practices as well. Henry Bibb was above all resilient and determined to achieve freedom for himself and others. Unwilling to abandon those he loved, he risked recapture several times to free them from enslavement, too. In the small span of his thirty-nine years he would live to be reunited with three of his brothers who had fled to Canada.

Henry Bibb (1815-1854) was born in Shelby County, Kentucky, the son of an enslaved woman named Mildred Jackson and a state senator. He escaped to freedom and became an antislavery activist, publishing his Narrative in 1849.
For more information about Henry Bibb, visit the Author Page.