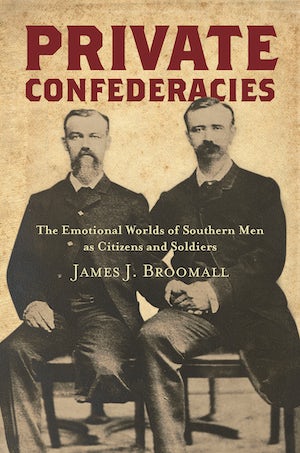 How did the Civil War, emancipation, and Reconstruction shape the masculinity of white Confederate veterans? As James J. Broomall shows, the crisis of the war forced a reconfiguration of the emotional worlds of the men who took up arms for the South. Raised in an antebellum culture that demanded restraint and shaped white men to embrace self-reliant masculinity, Confederate soldiers lived and fought within military units where they experienced the traumatic strain of combat and its privations together--all the while being separated from suffering families. Military service provoked changes that escalated with the end of slavery and the Confederacy's military defeat. Returning to civilian life, Southern veterans questioned themselves as never before, sometimes suffering from terrible self-doubt.

Drawing on personal letters and diaries, Broomall argues that the crisis of defeat ultimately necessitated new forms of expression between veterans and among men and women. On the one hand, war led men to express levels of emotionality and vulnerability previously assumed the domain of women. On the other hand, these men also embraced a virulent, martial masculinity that they wielded during Reconstruction and beyond to suppress freed peoples and restore white rule through paramilitary organizations and the Ku Klux Klan.

James J. Broomall is assistant professor of history at Shepherd University and director of the George Tyler Moore Center for the Study of the Civil War.
For more information about James J. Broomall, visit the Author Page.

“Succeeds in illuminating the murky, oft-neglected human factors that shaped the Civil War. . . . A valuable addition.”--Journal of America’s Military Past

“Broomall’s conclusions are bold and indeed timely. . . . Private Confederacies deserves a wide readership. It asks new questions and tells us new things about how the Civil War and Reconstruction actually felt.”--Journal of the Shenandoah Valley During the Civil War Era

“Brings a new form of analysis to Civil War historiography by drawing on methodologies of emotions history and gender history in order to better understand the mentalities and experiences of Confederate soldiers during the American Civil War. . . . These responses provide new depth and complexity to scholars’ understanding of the culture of the Civil War and its aftermath.”--H-Net Reviews

“An important book that reveals the inner and emotional world of Confederate soldiers. . . . Broomall is a gifted writer. . . . and one expects much more from him in future years.”--North Carolina Historical Review

"White men of the Civil War–era South often appear in popular memory as stock figures with limited emotional ranges: hotheaded bullies, stoic warriors, or pious defenders of hearth and home. With Private Confederacies: The Emotional Worlds of Southern Men as Citizens and Soldiers, James J. Broomall cuts through these condescending caricatures in a methodologically sophisticated study of Confederate soldiers, which offers nuanced analysis and embraces the ambiguity and diversity of emotional experience."--American Historical Review