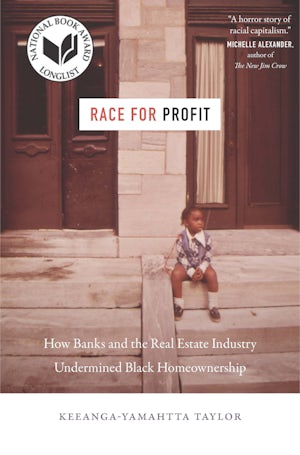 LONGLISTED FOR THE 2019 NATIONAL BOOK AWARD

By the late 1960s and early 1970s, reeling from a wave of urban uprisings, politicians finally worked to end the practice of redlining. Reasoning that the turbulence could be calmed by turning Black city-dwellers into homeowners, they passed the Housing and Urban Development Act of 1968, and set about establishing policies to induce mortgage lenders and the real estate industry to treat Black homebuyers equally. The disaster that ensued revealed that racist exclusion had not been eradicated, but rather transmuted into a new phenomenon of predatory inclusion.

Race for Profit uncovers how exploitative real estate practices continued well after housing discrimination was banned. The same racist structures and individuals remained intact after redlining’s end, and close relationships between regulators and the industry created incentives to ignore improprieties. Meanwhile, new policies meant to encourage low-income homeownership created new methods to exploit Black homeowners. The federal government guaranteed urban mortgages in an attempt to overcome resistance to lending to Black buyers – as if unprofitability, rather than racism, was the cause of housing segregation. Bankers, investors, and real estate agents took advantage of the perverse incentives, targeting the Black women most likely to fail to keep up their home payments and slip into foreclosure, multiplying their profits. As a result, by the end of the 1970s, the nation’s first programs to encourage Black homeownership ended with tens of thousands of foreclosures in Black communities across the country. The push to uplift Black homeownership had descended into a goldmine for realtors and mortgage lenders, and a ready-made cudgel for the champions of deregulation to wield against government intervention of any kind.

Narrating the story of a sea-change in housing policy and its dire impact on African Americans, Race for Profit reveals how the urban core was transformed into a new frontier of cynical extraction.

Keeanga-Yamahtta Taylor is assistant professor of African American studies at Princeton University and author of From BlackLivesMatter to Black Liberation and How We Get Free: Black Feminism and the Combahee River Collective.
For more information about Keeanga-Yamahtta Taylor, visit the Author Page.

"The book makes a strong case that giving so much power to profit-driven industries doomed the program's goals from the start, and there are clear parallels to the later subprime mortgage crisis of the 2000s. Race for Profit is an important addition to the literature on predatory lending and housing discrimination, as well as a valuable warning."--Foreword Reviews

"Essential for readers wishing to understand the depth and differentials of U.S. racial discrimination, Taylor’s masterly exposé of the political economy of the racially bifurcated market systematically lays bare how residential segregation made profits from race; it also illustrates the mismatch of market solutions to racist policies and practices and underscores the limits of legislation alone to undo institutional racism."--Library Journal, starred review

“Like many historians, Taylor stays close to the history she documents and doesn’t set out to address the present day in a sustained or direct way. She doesn’t propose a solution to these perpetual abuses, and certainly not a neat, bipartisan policy move. In her telling, the problems are deep and abiding. They have to do with the degree to which the “American Dream” has become synonymous with the big yet also small accomplishment of owning a house.”--The New Republic

"Details bungling mismanagement, gross corruption, distorted incentives, civil rights regulations that went unheeded and unenforced — what Taylor calls a system of “predatory inclusion” that was distinct yet not entirely free from the racist system of exclusion that preceded it."--The New York Times

“Taylor grounds her analysis in extensive archival research and in conversation with the historiography that it both extends and challenges.”--Metropolitics